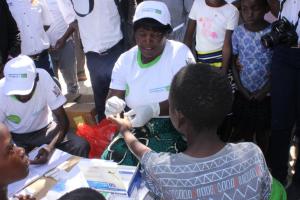 Malaria is among the important factors affecting socio-economic development in Zambia. It kills approximately over a thousand people per year with about 311 cases per 1000 population. Despite the government’s increased domestic funding and good external support to the malaria programme, resource gaps remain. This has necessitated the development of an investment case, continued advocacy for increased resources and creation of awareness in the communities to accelerate malaria elimination efforts. The World Malaria Day (WMD) 2019 provided a good platform for raising awareness and advocacy for investment in prevention and elimination efforts. The commemoration took place in the rural district of Lufwanyama on the Copperbelt province on 26th April, 2019 under the theme “Zero Malaria Starts with me”. The theme stresses the need to empower individuals to make personal commitment to save lives by adopting and effectively using simple but cost effective interventions.

In his speech to launch the World Malaria Day commemoration, the Minister of Health, Dr Chitalu Chilufya, MP recognized the valuable contribution that various partners and the World Health Organisation were making in supporting the malaria elimination programme. The minister urged all partners and stakeholders to continue working with the government to eliminate the disease in the country. At the same event, the minister launched the 2019 community distribution of Long Lasting Insecticidal Nets (LINs) and the Malaria Indicator Survey (2018) report which highlights the coverage of key preventive and control interventions and malaria trends in the country. In addition, the minster gave several awards to deserving companies and individuals involved in malaria control and elimination programmes and activities.

At the same event, the WHO Representative, Dr Nathan N. Bakyaita delivered a speech on behalf of the United Nations. He stated that the UN in Zambia was committed to supporting malaria elimination efforts. Dr. Bakyaita appealed to community members to sleep under Insecticide Treated Nets every day and to seek malaria testing and treatment services.

In a statement made by Mr. John Kuehnle, acting UDAID Health Office Director on behalf of the US Embassy Envoy, Mr. Daniel L. Foote, he stated that the US government would continue to make investments in malaria elimination and reaffirmed its commitment to working with the Government of the Republic of Zambia and other partners in the fight against malaria.

The WMD 2019 event brought together a large number of communities, several agencies and partners involved in malaria control including the private sector.