World TB Day celebrated on 24 March each year, is an opportunity to raise awareness about the burden of tuberculosis (TB) worldwide and the status of TB prevention and care efforts. It is also an opportunity to mobilize political and social commitment for further progress in efforts to end TB.

TB is the ninth leading cause of death worldwide and the leading cause from a single infectious agent, ranking above HIV/AIDS. Over 25% of TB deaths occur in the African Region. The emergence of multidrug-resistant TB (MDR-TB) poses a major health security threat and could risk gains made in the fight against TB.

Tuberculosis (TB) is caused by bacteria (Mycobacterium tuberculosis) that most often affect the lungs. Tuberculosis is curable and preventable.

TB is spread from person to person through the air. When people with lung TB cough, sneeze or spit, they propel the TB germs into the air. A person needs to inhale only a few of these germs to become infected.

About one-third of the world's population has latent TB, which means people have been infected by TB bacteria but are not (yet) ill with the disease and cannot transmit the disease.

People infected with TB bacteria have a 10% lifetime risk of falling ill with TB. However, persons with compromised immune systems, such as people living with HIV, malnutrition or diabetes, or people who use tobacco, have a much higher risk of falling ill.

When a person develops active TB disease, the symptoms (such as cough, fever, night sweats, or weight loss) may be mild for many months. This can lead to delays in seeking care, and results in transmission of the bacteria to others. People with active TB can infect 10–15 other people through close contact over the course of a year. Without proper treatment, 45% of HIV-negative people with TB on average and nearly all HIV-positive people with TB will die.

Who is most at risk?

Tuberculosis mostly affects adults in their most productive years. However, all age groups are at risk. Over 25% of cases and deaths are in the African region.

People who are infected with HIV are 20 to 30 times more likely to develop active TB (see TB and HIV section below). The risk of active TB is also greater in persons suffering from other conditions that impair the immune system.

Tobacco use greatly increases the risk of TB disease and death. More than 20% of TB cases worldwide are attributable to smoking.

TB occurs in every part of the world. In 2015, the largest number of new TB cases occurred in Asia, with 61% of new cases, followed by Africa, with 26% of new cases.

In 2015, 87% of new TB cases occurred in the 30 high TB burden countries. Six countries accounted for 60% of the new TB cases: India, Indonesia, China, Nigeria, Pakistan, and South Africa. Global progress depends on advances in TB prevention and care in these countries.

Common symptoms of active lung TB are cough with sputum and blood at times, chest pains, weakness, weight loss, fever and night sweats. Many countries still rely on a long-used method called sputum smear microscopy to diagnose TB. Trained laboratory technicians look at sputum samples under a microscope to see if TB bacteria are present. Microscopy detects only half the number of TB cases and cannot detect drug-resistance.

The use of the rapid test Xpert MTB/RIF® has expanded substantially since 2010, when WHO first recommended its use. The test simultaneously detects TB and resistance to rifampicin, the most important TB medicine. Diagnosis can be made within 2 hours and the test is now recommended by WHO as the initial diagnostic test in all persons with signs and symptoms of TB. More than 100 countries are already using the test and 6.2 million cartridges were procured globally in 2015.

Diagnosing multi-drug resistant and extensively drug-resistant TB (see Multidrug-resistant TB section below) as well as HIV-associated TB can be complex and expensive. In 2016, 4 new diagnostic tests were recommended by WHO – a rapid molecular test to detect TB at peripheral health centres where Xpert MTB/RIF cannot be used, and 3 tests to detect resistance to first- and second-line TB medicines.

Tuberculosis is particularly difficult to diagnose in children and as yet only the Xpert MTB/RIF assay is generally available to assist with the diagnosis of paediatric TB.

TB is a treatable and curable disease. Active, drug-susceptible TB disease is treated with a standard 6 month course of 4 antimicrobial drugs that are provided with information, supervision and support to the patient by a health worker or trained volunteer. Without such support, treatment adherence can be difficult and the disease can spread. The vast majority of TB cases can be cured when medicines are provided and taken properly.

Between 2000 and 2015, an estimated 49 million lives were saved through TB diagnosis and treatment.

42% of HIV positive people (newly enrolled in care) are on preventive treatment against TB in he region.

HIV and TB form a lethal combination, each speeding the other's progress. In 2016 320,000 people died of HIV-associated TB in the

African region. About 35% of deaths among HIV-positive people were due to TB in 2015. In 2015 there were an estimated 1.2 million new cases of TB amongst people who were HIV-positive, 71% of whom were living in Africa.

WHO recommends a 12-component approach of collaborative TB-HIV activities, including actions for prevention and treatment of infection and disease, to reduce deaths.

Multidrug-resistant tuberculosis (MDR-TB) is a form of TB caused by bacteria that do not respond to isoniazid and rifampicin, the 2 most powerful, first-line anti-TB drugs. MDR-TB is treatable and curable by using second-line drugs. However, second-line treatment options are limited and require extensive chemotherapy (up to 2 years of treatment) with medicines that are expensive and toxic.

In some cases, more severe drug resistance can develop. Extensively drug-resistant TB (XDR-TB) is a more serious form of MDR-TB caused by bacteria that do not respond to the most effective second-line anti-TB drugs, often leaving patients without any further treatment options.

WHO estimates that between 36 000 and 44 000 multi-drug resistant (MDR-TB) cases occurred in the AFRO Region in 2016. Among new MDR-TB cases, 15% developed resistance to rifampicin (the most effective first-line medicine) and needed MDR-TB treatment.
Globally, the MDR-TB burden largely falls on 3 countries – China, India, and the Russian Federation – which together account for nearly half of the global cases. About 9.5% of MDR-TB cases had XDR-TB in 2015.

To date, all countries of the African region except Seychelles have notified cases of multi-drug resistant TB (MDR-TB) and 13 countries have ever reported case of extensively-drug resistant tuberculosis (XDR-TB). Further, there continues to be a diagnosis / treatment gap with only approximately 68% of diagnosed.

In 2016, WHO approved the use of a short, standardised regimen for MDR-TB patients who do not have strains that are resistant to second-line TB medicines. This regimen takes 9–12 months and is much less expensive than the conventional treatment for MDR-TB, which can take up to 2 years. Patients with XDR-TB or resistance to second-line anti-TB drugs cannot use this regimen, however, and need to be put on longer MDR-TB regimens to which 1 of the new drugs (bedquiline and delamanid) may be added.

The WHO "End TB Strategy", adopted by the World Health Assembly in May 2014, is a blueprint for countries to end the TB epidemic by driving down TB deaths, incidence and eliminating catastrophic costs. It outlines global impact targets to reduce TB deaths by 90%, to cut new cases by 80% between 2015 and 2030, and to ensure that no family is burdened with catastrophic costs due to TB.

Ending the TB epidemic by 2030 is among the health targets of the newly adopted Sustainable Development Goals. WHO has gone one step further and set a 2035 target of 95% reduction in deaths and a 90% decline in TB incidence – similar to current levels in low TB incidence countries today.

The Strategy outlines three strategic pillars that need to be put in place to effectively end the epidemic:

The success of the Strategy will depend on countries respecting the following 4 key principles as they implement the interventions outlined in each pillar:

The WHO Regional Office for Africa has also developed a framework for implementing the End TB Strategy in the African Region (2016 – 2020). This framework supports the adaptation and implementation of the Global Strategy in countries based on their contextual circumstances. Overall, the Region wants to reduce the number of TB deaths by 35%, the number of TB patients by 20% and attain 0% TB-affected families facing catastrophic costs due to TB.

END_OF_DOCUMENT_TOKEN_TO_BE_REPLACED 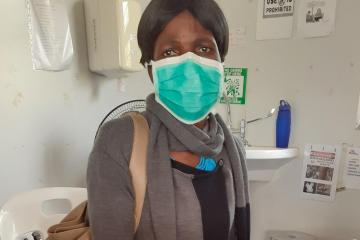 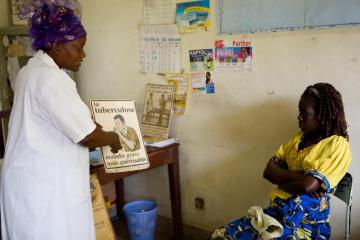 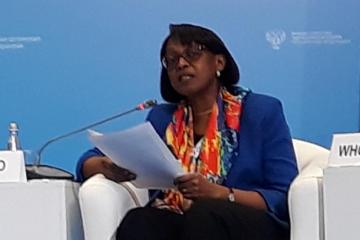 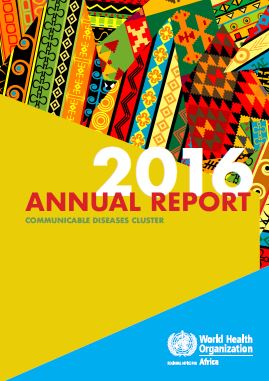 This is the first annual report produced by the newly established Communicable Diseases Cluster (CDS) of the World Health Organization (WHO) Regional Office for Africa.

The overwhelming majority of deaths in the WHO African Region are caused by HIV/AIDS, malaria and tuberculosis (TB). Along with neglected tropical diseases (NTDs), these infections are diminishing Africans’ quality of life as individuals and thwarting entire countries’ ability to develop vibrant and productive communities, stronger economies and safer societies.

The AFRO and WHO country offices – working in partnership with governments, United Nations agencies and other global and regional partners, non-governmental organizations and the private sector – have been behind dramatic reductions in illness and deaths from these diseases.
We know how to reduce their impact – proven policies and strategies for prevention, treatment and for some diseases, elimination, are available, but there is much yet to be done.