Protection of the Human Environment

Water is essential for life and good health. Fresh water is not only needed for drinking but also cooking, food production and a variety of other uses such as sanitation, hygiene and cleanliness practises. Lack of sanitation can force people to defecate in the open, in rivers and near areas where children play. These habits result in 115 deaths every hour in the African Region.

Bacteria, viruses, parasites and pollution contaminate freshwater stores resulting in water scarcity. Water scarcity is a major problem even in areas where there is plenty of rainfall. A lack of clean water increases the risk of diarrhoeal diseases as cholera, typhoid fever and dysentery, and other water-borne tropical diseases. Water scarcity can also lead to diseases such as trachoma (an eye infection that can lead to blindness), plague and typhus.

Water scarcity affects 1 in 3 people in the African Region and is getting worse with population growth, urbanization and increases in household and industrial uses.

Water scarcity often encourages people to store water in their homes. This can increase the risk of household water contamination and provide breeding grounds for mosquitoes. Mosquitoes are carriers of dengue fever, malaria and other diseases.

Safe and readily available water is important for public health, whether it is used for drinking, domestic use, food production or recreational purposes. Improved water supply and sanitation, and better management of water resources, can boost countries’ economic growth and can contribute greatly to poverty reduction.

In 2010, the UN General Assembly explicitly recognised the human right to water and sanitation. Everyone has the right to sufficient, continuous, safe, acceptable, physically accessible and affordable water for personal and domestic use.

The Millennium Development Goal (MDG 7) on drinking-water was met globally in 2010. The target was to halve the proportion of the world’s population without sustainable access to safe water. The 48 least developed countries did not meet the target, but substantial progress has been made with 42 per cent of the current population in these countries gaining access to improved drinking-water sources since 1990.

Sharp geographic, sociocultural and economic inequalities persist, not only between rural and urban areas but also in towns and cities where people living in low-income, informal or illegal settlements usually have less access to improved sources of drinking-water than other residents.

Contaminated water and poor sanitation are linked to transmission of diseases such as cholera, diarrhoea, dysentery, hepatitis A, typhoid and polio. Absent, inadequate, or inappropriately managed water and sanitation services expose individuals to preventable health risks. This is particularly the case in health care facilities where both patients and staff are placed at additional risk of infection and disease when water, sanitation and hygiene services are lacking. Globally, 15% of patients develop an infection during a hospital stay, with the proportion much greater in low-income countries.

Inadequate management of urban, industrial and agricultural wastewater means the drinking-water of hundreds of millions of people is dangerously contaminated or chemically polluted.

Some 842 000 people are estimated to die each year from diarrhoea as a result of unsafe drinking-water, sanitation and hand hygiene. But diarrhoea is largely preventable, and the deaths of 361 000 children aged under 5 each year could be avoided each year if these risk factors were addressed. Where water is not readily available, people may decide handwashing is not a priority, thereby adding to the likelihood of diarrhoea and other diseases.

Diarrhoea is the most widely known disease linked to contaminated food and water but there are other hazards. Almost 240 million people are affected by schistosomiasis – an acute and chronic disease caused by parasitic worms contracted through exposure to infested water.

In many parts of the world, insects that live or breed in water carry and transmit diseases such as dengue fever. Some of these insects, known as vectors, breed in clean, rather than dirty water, and household drinking-water containers can serve as breeding grounds. The simple intervention of covering water storage containers can reduce vector breeding and may also have a co-benefit of reducing faecal contamination of water at the household level.

When water comes from improved and more accessible sources, people spend less time and effort in physically collecting it, meaning they can be productive in other ways. It can also result in greater personal safety by reducing the need to make long or risky journeys to collect water. Better water sources also mean less expenditure on health, as people are less likely to fall ill and incur medical costs, and are better able to remain economically productive.

With children particularly at risk from water-related diseases, access to improved sources of water can result in better health and therefore better school attendance, with longer-term consequences for their lives.

The MDG water target is measured by the proxy indicator of use of ‘improved’ or ‘unimproved’ drinking-water sources. But ‘improved sources’ are not necessarily safe. At least 1.8 billion people use a drinking-water source that is contaminated with faecal matter. A substantial proportion of water supplied through pipes is contaminated, especially where water supply is intermittent or treatment is inadequate. Even where the source is good, water can be contaminated while being transported or stored, especially in environments where sanitation is inadequate.

Climate change, increasing water scarcity, population growth, demographic changes and urbanization already pose challenges for water supply systems. By 2025, half of the world’s population will be living in water-stressed areas. Re-use of wastewater, to recover water, nutrients, or energy, is becoming an important strategy. Increasingly countries are using wastewater for irrigation – in developing countries this represents 7% of irrigated land. While this practice if done inappropriately poses health risks, safe management of wastewater can yield multiple benefits, including increased food production.

Options for water sources used for drinking-water and irrigation will continue to evolve, with an increasing reliance on groundwater and alternative sources, including wastewater. Climate change will lead to greater fluctuations in harvested rainwater. Management of all water resources will need to be improved to ensure provision and quality.

As the international authority on public health and water quality, WHO leads global efforts to prevent transmission of waterborne disease, advising governments on the development of health-based targets and regulations.

WHO produces a series of water quality guidelines, including on drinking-water, safe use of wastewater, and safe recreational water environments. The water quality guidelines are based on managing risks, and since 2004 the Guidelines for Drinking-water Quality included the promotion of Water Safety Plans to identify and prevent risks before water is contaminated. In 2015, WHO introduced the concept of Sanitation Safety Plans to support implementation of the wastewater guidelines. WHO works on promoting effective risk assessment and management practices among all groups, including suppliers of drinking water, wastewater treatment companies, farmers, communities and individuals.

Since 2014, WHO has been testing household water treatment products against WHO health-based performance criteria through the WHO International ‘Scheme’ to Evaluate Household Water Treatment Technologies. The aim of the Scheme is to ensure that products distributed protect users from the pathogens that cause diarrhoeal disease and to strengthen policy, regulatory, and monitoring mechanisms at the national level to support appropriate targeting and consistent and correct use of such products.

WHO works closely with UNICEF in a number of areas concerning water and health. For example, the integrated global action plan to end preventable child deaths from pneumonia and diarrhoea by 2025 (GAPPD) sets out several prevention and treatment targets, including achieving universal access to drinking water in health care facilities and homes by 2030. The means of implementation for the work in health care facilities cuts across several health areas, including quality universal health coverage, and the two agencies have established a work plan to incrementally work towards universal access at the facility, national and global level.

END_OF_DOCUMENT_TOKEN_TO_BE_REPLACED 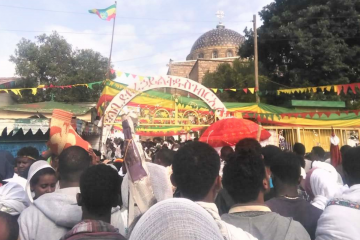 Protecting the devoted from cholera in pilgrimage sites in Ethiopia