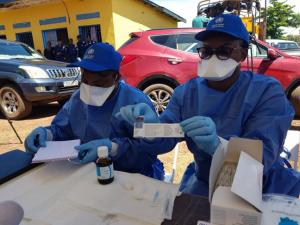 The Government of the Democratic Republic of Congo, with the support of WHO and partners, is preparing to vaccinate high risk populations against Ebola virus disease (EVD) in affected health zones.

Health workers operating in affected areas are being vaccinated today and community outreach has started to prepare for the ring vaccination.

More than 7,500 doses of the rVSV-ZEBOV Ebola vaccine have been deployed to the Democratic Republic of the Congo to conduct vaccination in the northwestern Equator Province where 46 suspected, probable and confirmed Ebola cases and 26 deaths have been reported (as of May 18). Most of the cases are in Bikoro, a remote rural town, while four confirmed cases are in Mbandaka, the provincial capital with a population of over 1 million people.

The vaccines are donated by Merck, while Gavi, the Vaccine Alliance is contributing US$1 million towards operational costs. The Wellcome Trust and DFID have also pledge funds to support research activities.

"Vaccination will be key to controlling this outbreak," said Dr Tedros Adhanom Ghebreyesus, WHO Director-General. "We are grateful for the support of our partners in making this possible."

The Ministry of Health with WHO, Medecins Sans Frontieres (MSF), UNICEF and other key partners are implementing a ring vaccination with the yet to be licensed rVSV-ZEBOV Ebola vaccine, whereby the contacts of confirmed cases and the contacts of contacts are offered vaccination. Frontline healthcare workers and other persons with potential exposure to EVD – including but not limited to laboratory workers, surveillance teams and people responsible for safe and dignified burials – will also receive the vaccine.

"We need to act fast to stop the spread of Ebola by protecting people at risk of being infected with the Ebola virus, identifying and ending all transmission chains and ensuring that all patients have rapid access to safe, high-quality care," said Dr Peter Salama, WHO Deputy Director-General for Emergency Preparedness and Response.

A ring vaccination strategy relies on tracing all the contacts and contacts of contacts of a recently confirmed case as soon as possible. Teams on the ground have stepped up the active search and follow up of all contacts. More than 600 have been identified to date.

"Implementing the Ebola ring vaccination is a complex procedure," said Dr Matshidiso Moeti, WHO Regional Director for Africa. "The vaccines need to be stored at a temperature of minus 60 to minus 80 degrees centigrade and so transporting them to and storing them in affected areas is a major challenge."

WHO has sent special vaccine carriers, which can keep their contents in sub-zero temperatures for up to a week and has set up freezers to store the vaccines in Mbandaka and Bikoro. The Organization is deploying both Congolese and Guinean experts to build the capacities of local health workers. The Ministry of Health, WHO, UNICEF and partners are engaging communities to inform people about Ebola, including the vaccine.

The vaccine was shown to be highly protective against Ebola in a major trial in 2015 in Guinea. Among the 5,837 people who received the vaccine, no Ebola cases were recorded nine days or more after vaccination. While the vaccine is awaiting review by relevant regulatory authorities, WHO’s Strategic Advisory Group of Experts on Immunization (SAGE) has recommended the use of the rVSV-ZEBOV Ebola vaccine under an expanded access/compassionate use protocol during Ebola outbreaks linked to the Zaire strain such as the one ongoing in the DRC.

WHO and partners need US$26 million for the Ebola Response in the Democratic Republic of the Congo over the next three months. Funding has been received from Italy, UN CERF, Gavi – the Vaccine Alliance, USAID, the Wellcome Trust and UK DFID. WHO has also released US$2 million from its Contingency Fund for Emergencies

WHO partners in the DRC Ebola response include: 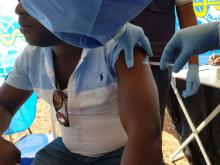 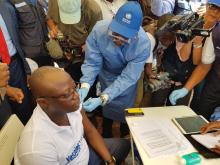