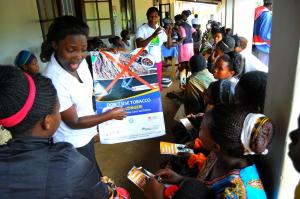 Dr Hafsa Lukwata gives a firm answer when asked about the Tobacco industry in Uganda: “We know the tobacco industry has a million tricks up its sleeve to promote tobacco consumption. We will not give up until we save the lives of innocent Ugandans.”

A public health practitioner, heading the mental health program in Uganda’s Ministry of Health, Dr Lukwata has devoted her personal and professional life to tackling the scourge of Tobacco consumption in Uganda.

“Ugandans have been hoodwinked to think that Tobacco growing improves their livelihoods while consumption is looked at as a leisure activity, of which none is true”, she notes.

The World Health Organization (WHO) identifies tobacco as the leading cause of preventable deaths in the world.

The Health Cost of Tobacco Use in Uganda- Report

A study carried out using data from the Uganda Cancer Institute, the Heart Institute, the Diabetic and the Chest clinic sampled 353 patients for the survey. The study used the WHO Economics of Tobacco Toolkit: Assessment of Economic Costs of Smoking, where the Annual Cost option of the “Cost of Illness Approach” was adopted.

The survey results published in The Health Cost of Tobacco Use in Uganda- Report revealed that the annual average medical cost of a current or former smoker suffering from a tobacco-attributable disease is $1,422 which is more than double the annual average medical cost of a non-smoker, that is at $622. According to the report, the direct cost of treating tobacco-attributable illnesses in Uganda is estimated to be $41.56 Million.

WHO Officers speak out

“These resources could have been diverted to more productive uses benefiting public health as well as the economy”, says Dr Hafisa Kasule, the Non-Communicable Disease Consultant at WHO.

Dr Kasule adds that the growing burden of NCDs including Tobacco-related diseases is becoming costly for both the individuals and the country.

It is therefore not surprising that the Ministry of Health and partners including WHO, the Centre for Tobacco Control in Africa (CTCA), Uganda Cancer Institute and others are working together to ensure that Uganda tackles tobacco growing and usage.

Uganda is a signatory to the WHO Framework Convention on Tobacco Control (WHO-FCTC) which provides countries with evidence-based strategies to address the tobacco epidemic in their national context. It also calls on countries to adopt administrative, political and legal policies to address tobacco control.

Uganda has made a lot of progress in the implementation of the provisions of the WHO FCTC.

For instance, in 2015, the country passed one of the strongest tobacco control laws in the world. Subsequently, the Minister of Health published the tobacco control regulations.

According to WHO’s Tobacco Epidemic Report of 2019, Cigarettes have become less affordable between 2008 and 2018 in Uganda. Other gains in tobacco control in the country include a ban on direct Advertising, Promotion and Sponsorship, enforcement of Smoke- Free Environments and an increase in tobacco taxation by 39.9%.

Looking back at Uganda's Tobacco Journey

At an event held recently in Kampala to assess the progress made by Uganda in Tobacco Control, the Minister of Health, Dr Jane Ruth Aceng, commended the mental health program and partners for their efforts. “We are dealing with an industry that has a lot of resources, we need to remain steadfast and fight tobacco in the country. Do not be compromised,” she cautioned.

The WHO Representative, Dr Yonas Tegegn Woldemariam also added his voice noting that Uganda is doing well in tackling tobacco consumption. “However, be rest assured that the industry is also not going to make it easy for you. WHO is here to support all the government efforts to fight tobacco consumption”, he said.