Three years without a case of wild polio virus, Government of Nigeria warns against complacency 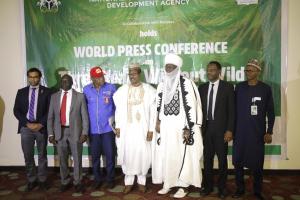 Three years without a case of wild polio virus, Government of Nigeria warns against complacency

Abuja, 21 August, 2019 - Today marks a major milestone in the history of Nigeria’s Polio Eradication Programme as the country reaches 3 years without reporting a case of wild poliovirus. In a Press Conference to brief the media, the Executive Director of the National Primary Health Care Development Agency (NPHCDA), Dr Faisal Shuaib, whilst acknowledging that Nigeria passing the three-year benchmark without a single wild polio virus case is a step forward to certifying the entire African region wild poliovirus-free, cautioned that the achievement is very fragile “one which we must delicately manage with cautious euphoria”

“This achievement would certainly not have been possible without the novel strategies adopted in the consistent fight against polio and other vaccine preventable diseases. We commend the strong domestic and global financing and the commitment of government at all levels.” The Executive Director of NPHCDA stated.

While speaking at the event, the World Health Organization Officer in Charge (OIC) for Nigeria, Dr Peter Clement, acknowledged the efforts of Government of Nigeria, partners and the thousands of polio workers over the past three decades to bring the wild polio virus count to zero.

“Since the last outbreak of wild polio in 2016 in the northeast, Nigeria has strengthened supplementary immunization activities and routine immunization, implemented innovative strategies to vaccinate hard-to-reach children and improved acute flaccid paralysis (AFP) and environmental surveillance. These efforts are all highly commendable.”  The OIC affirmed.

Despite the significant progress, ending all forms of polio across the region remains an unfinished success story. Low immunization rates pose a major risk to other forms of polio virus outbreaks; furthermore, inaccessibility to some children pose as a major threat to sustaining recent gains.

High routine immunization coverage and quality surveillance remain most critical in the build up towards certification and post certification. “As long as polio virus still exists in any part of the world (as it currently does in Afghanistan and Pakistan), all children are at risk, therefore we must maintain the momentum towards regional and global certification,” stated Dr Clement.

It is important to note that following the Nigeria three-year mark, the Africa Regional Commission for Certification of Polio Eradication (ARCC) will begin a rigorous process to confirm if each country in the region is wild polio-free. Nigeria will submit its final country data for evaluation in March 2020, provided there are no new wild polio cases. If the data confirms zero cases, the entire WHO AFRO region may receive wild polio-free certification as soon as mid-2020, leaving only one region out of six around the world (the Eastern Mediterranean region) where wild polio virus still exists.

The press briefing was attended by country representatives of all GPEI partners: WHO, UNICEF, CDC, Rotary and the Bill & Melinda Gates Foundation; as well as USAID, Government of Germany, EU and Canada. The Emir of Jiwa, representing the Northern Traditional Leaders Committee was also in attendance.