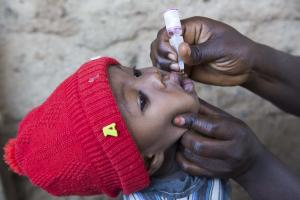 Brazzaville, 23 December 2019 – Kenya, Mozambique and Niger have curbed polio outbreaks that erupted in different episodes over the past 24 months, allowing them to regain their polio-free status, World Health Organization (WHO) announced today.

Transmission of vaccine-derived poliovirus was detected in the three countries in 2018 and early 2019, affecting a total of 14 children.

“Ending outbreaks in the three countries is proof that response activities along with high quality immunization campaigns and vigilant disease surveillance can stop the remaining outbreaks in the region,” said Dr Modjirom Ndoutabe, coordinator of WHO-led polio outbreaks Rapid Response Team for the African Region.

“We are strongly encouraged by this achievement and determined in our efforts to see all types of polio eradicated from the continent. It is a demonstration of the commitment by governments, WHO and our partners to ensure that future generations live free of this debilitating virus,” added Dr Ndoutabe.

Vaccine-derived polioviruses are rare, but they affect unimmunized and under-immunized populations living in areas with inadequate sanitation and low levels of polio immunization. When children are immunized with the oral polio vaccine, the attenuated vaccine virus replicates in their intestines for a short time to build up the needed immunity and is then excreted in faeces into the environment where it can mutate. If polio immunization coverage remains low in a community and sanitation remains inadequate, the mutated viruses will be transmitted to susceptible populations, leading to emergence of vaccine-derived polioviruses.

No wild poliovirus has been detected anywhere in Africa since 2016. This stands in stark contrast to 1996, a year when wild poliovirus paralysed more than 75,000 children across the continent. However, some countries are currently facing outbreaks of vaccine-derived poliovirus.

To end outbreak activities in an affected country, national and regional disease surveillance and laboratory teams need to confirm that no polio transmission is detected in samples collected from paralysed children, children in contact, and the environment for at least nine months.

Response to the polio outbreak requires a strong multisector collaboration. In these efforts, WHO with other Global Polio Eradication Initiative spearheading partners: United Nations Children Fund, Rotary International, US Centers for Diseases Control and Prevention, Bill and Melinda Gates Foundation and other stakeholders have been supporting the governments of affected countries in implementing measures to end the transmission of the poliovirus.

Countries still experiencing outbreaks of vaccine-derived poliovirus in Africa are: Angola, Benin, Cameroon, Central African Republic, Chad, Côte d'Ivoire, Democratic Republic of the Congo, Ethiopia, Ghana, Nigeria, Togo and Zambia. The risk factors for these outbreaks include weak routine vaccination coverage, vaccine refusal, difficult access to some locations and low-quality vaccination campaigns, which have made immunization of all children difficult.

Countries of the region experiencing outbreaks should ensure their routine immunization system is robust as they continue to implement outbreak response, following internationally-agreed guidelines and strengthening surveillance activities to rapidly detect any further cases. To successfully implement the outbreak response required, the engagement of government authorities at all levels, civil society and the general population, is crucial to ensure that all children under the age of five are vaccinated against polio.

Polio is a viral disease, that is transmitted from person to person, mainly through a faecal-oral route or, less frequently, through contaminated water or food, and multiplies inside the intestines.

While there is no cure for polio, the disease can be prevented through administration of a simple and effective vaccine. That is why efforts are underway across every country to rapidly boost immunity levels in children, and protect them from polio paralysis.