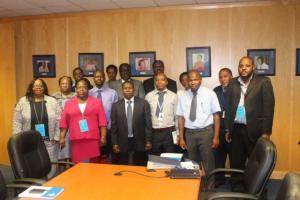 Mbabane , Swaziland, 03 November 2014:  Swaziland successfully held the national health research conference at the convention centre in Ezulwini from the 15th to the 17th of October 2014 under the theme "Investing in Health for Development". The conference was held under 4 tracks namely; Universal health access and coverage; Mobilization and efficient use of resources for health; Improving health outcomes and health; and Equity and development from a human rights perspective

The conference was attended by The Right Honourable Prime Minister of Swaziland Dr Sibusiso Barnabas Dlamini, who officially opened the conference. The WHO Regional Director for Africa, Dr Luis Sambo was represented by Dr David Okello, the World Health Organization Inter-country Support Team Coordinator for East and Southern Africa. Dr Okello, on behalf of Dr Luis Gomes Sambo, gave remarks during the opening session of the conference. The Honourable Minister for Health , Senator Sibongile Ndlela-Simelane, the United Nations Resident Coordinator, Mr Israel Dessalegne, the WHO Country Representative, Dr Owen Kaluwa, Heads of other UN Agencies and Development Partners, Senior Government officials, researchers as well as members of the media also attended the conference.

The Right Honourable Prime Minister officially opened the research conference. In his opening remarks he focused on the importance of investing in health for development.
He emphasised the need to focus on addressing social and economic determinants of health. "And let us not forget that, while the health sector is the primary actor in continuously raising the standard of health in our population, there are other significant actors. Investment in roads improves access to health services while a school feeding scheme enables children to receive a daily nutritious meal, and a comprehensive and well-taught school curriculum informs children on what is a healthy lifestyle and the serious damage that is done by any substance abuse".
He also touched on Ebola Virus Disease emphasising that Ebola is a threat and the health protection arrangements that have been set up must continue by implementing the detailed advice of the World Health Organisation (WHO), with regard to Ebola infection prevention and control. He then thanked the organisers of the event, and express great appreciation to the invited guests for finding time to come to the country and share their views and experiences.

Dr Okello then delivered the message from the WHO Regional Director.  He emphasised WHO's commitment to promotion and conducting of research. He said that three of WHO's core functions directly reflect this commitment. "WHO will continue to promote the message that research is fundamental to generating knowledge to improve health outcomes", he said.
He also focused on the importance of ethics of research on human subjects as well as moving from research to policy. He also commended Swaziland on the great success achieved in the areas of HIV and childhood immunization. He also assured the nation of WHO's readiness and commitments to continue supporting the national efforts to address the health development challenges that the country faces.

During the closing ceremony the Honourable Minister of Health gave a summary of what was covered during the conference. She highlighted that the Ministry of Health will take the issues raised from the conference seriously with the goal of informing the national health agenda. The topical issues discussed and the evidence gathered will be used for evidence based decision making.

The WHO country representative, Dr Owen Kaluwa made a plenary presentation on Universal Health Coverage during the conference as well as making remarks during the official closing ceremony. In his remarks he congratulated the Honourable Minister, the conference organizers, the speakers and everyone for the job well done in holding the conference. He then commended the country for making significant strides towards strengthening health systems. The National research agenda needs support to enable high quality evidence generation. He urged everyone to take full advantage of the potential that research has in improving delivery of health services. He concluded by reiterating the support WHO continues to give to the country toward addressing the health challenges that the country is facing.

During the three days of the conference a lot of high quality information was shared through plenary presentations, break away sessions, poster presentations and other special sessions which included a dinner. The research conference is an event that is held every two years since 2010 supported by a number of development partners including WHO.

During Dr Okello's visit he met senior government official, the UN Resident Coordinator as well as the WHO country office staff. Of note is the fact that Dr Okello was once the WHO Country representative for Swaziland.