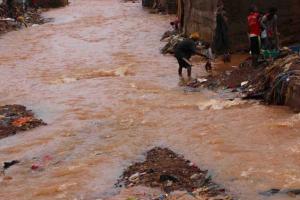 FREETOWN, 5 September 2017 – Half a million people in Sierra Leone will be able to access the life-saving cholera vaccine within weeks, the country’s Ministry of Health and Sanitation announced on Tuesday.

The vaccines will be received from the Gavi-funded global stockpile and will target areas particularly affected by August’s floods and deadly landslide, which resulted in over 500 confirmed deaths. Hundreds more people were reported missing in the wake of the disaster, according to the Office of National Security, while thousands were displaced from their homes.

“Cholera is a devastating disease which spreads quickly and kills fast, and risks can increase after severe flooding,” said Dr. Brima Kargbo, Chief Medical Officer at the Ministry of Health and Sanitation. “The oral cholera vaccine is an important tool to better protect the country and affected communities against the disease, which will ultimately save lives.”

Two rounds of vaccination are planned to run from September and will be delivered in 25 affected communities by the Government of Sierra Leone with support from Gavi Alliance, the World Health Organization (WHO), UNICEF, the UK Government and other health partners.

“The devastating floods and landslides which ravaged Sierra Leone throughout August have left the country dangerously vulnerable to water-borne disease outbreaks,” said Dr. Seth Berkley, CEO of Gavi Alliance. “Access to safe water and sanitation is limited, and the public health system, still recovering after the 2014 Ebola outbreak, is stretched. These lifesaving vaccines, alongside urgent support to improve safe water and sanitation, have the potential to prevent a cholera outbreak before it has the chance to bring more misery to a country that has already suffered enough.”

The decision to send cholera vaccines from the global stockpile was taken quickly on 31th August by the International Coordinating Group (ICG) for Vaccine Provision following the deployment of a WHO specialist to the country. The full quantity of the vaccine (1,036,300 doses for two rounds) is set to arrive in Freetown on 7th September through UNICEF’s global Supply Division.

WHO recommends that vaccination against cholera be considered in emergencies and other high-risk scenarios where there are increased threats of outbreaks, when combined with standard prevention and control measures for the disease. These measures include readiness to provide adequate testing and treatment, steps to ensure access to safe water and sanitation, and community mobilization to engage the public in preventing infection.

Gavi, WHO, UNICEF and partners are working with the Ministry of Health and Sanitation to help plan and implement the campaign, which will make the vaccine available free-of-cost to disaster-affected populations, while supporting ongoing cholera prevention and preparedness.

Gavi, the Vaccine Alliance is a public-private partnership committed to saving children's lives and protecting people's health by increasing equitable use of vaccines in lower-income countries. The Vaccine Alliance brings together developing country and donor governments, the World Health Organization, UNICEF, the World Bank, the vaccine industry, technical agencies, civil society, the Bill & Melinda Gates Foundation and other private sector partners. Gavi uses innovative finance mechanisms, including co-financing by recipient countries, to secure sustainable funding and adequate supply of quality vaccines. Since 2000, Gavi has contributed to the immunisation of nearly 580 million children and the prevention of approximately 8 million future deaths. Learn more at www.gavi.org and connect with us on Facebook and Twitter.

The World Health Organization (WHO) is building a better future for people everywhere. Health lays the foundation for vibrant and productive communities, stronger economies, safer nations and a better world. As the lead health authority within the United Nations (UN) system, we help ensure the safety of the air we breathe, the food we eat, the water we drink and the medicines and vaccines that treat and protect us. The Organization aims to provide every child, woman and man with the best chance to lead a healthier, longer life. For more information about WHO visit www.afro.who.int or Facebook and Twitter (@WHOSierraLeone)

UNICEF promotes the rights and wellbeing of every child, in everything we do. Together with our partners, we work in 190 countries and territories to translate that commitment into practical action, focusing special effort on reaching the most vulnerable and excluded children, to the benefit of all children, everywhere. For more information about UNICEF and its work visit: www.unicef.org or follow UNICEF on Facebook and Twitter.

This is a joint media release from the Government of Sierra Leone, Gavi, WHO and UNICEF.