Over 1 million doses of COVID-19 vaccine administered in Angola 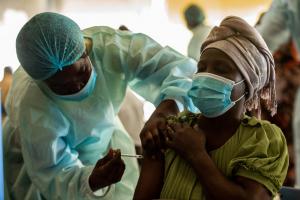 Over 1 million doses of COVID-19 vaccine administered in Angola

Angola has reached the milestone of more than 1 million doses of COVID-19 vaccines administered after receiving the first doses from COVAX, a partnership between Gavi, the Vaccine Alliance, the Coalition for Epidemic Preparedness Innovations (CEPI )and WHO, which aims to ensure equitable distribution of vaccines against COVID-19, worldwide.

Luanda – The Angolan Ministry of Health announced the milestone of more than 1 million doses of vaccines administered to the population, after  receiving 624 000 doses of the AstraZeneca-Oxford vaccine on 2 March this year from the Serum Institute of India, as part of the COVAX initiative, and subsequently, in April 2021, an additional 495 000 doses.

A total of 2.17 million doses of the COVID-19 vaccine were allocated to Angola until June 2021, as part of the doses donated to more than 92 low-income countries by partners of the COVAX initiative.

According to the WHO Representative in Angola, Dr Djamila Cabral, the positive results recorded in the country reflect the commitment of the authorities and the joint efforts of society to fight the COVID-19 pandemic.

"We congratulate Angola for the country’s strong engagement and determination which began with a timely preparation of a vaccination plan and quick regulatory oversight, resulting in a positive response from COVAX and the timely procurement of vaccines for the protection of the Angolan people,” she said. “WHO is pleased to be part of Angola’s efforts to protect the health of all and save lives.”

To ensure safe and equitable access to the COVID-19 vaccines and the success of the vaccination campaign, the Angolan health authorities have developed, with the support of their partners—WHO, United Nations Children’s Fund (UNICEF) and Gavi—a National Vaccination and Vaccine Distribution Plan. The plan includes the prioritization of target groups, strengthening of infrastructure for vaccination and the cold chain, the training of vaccinators, the continuous management of misinformation, the creation of an electronic vaccination registration system and the creation of high-performance vaccination centers.

UNICEF's Representative in Angola, Ivan Yerovi, affirmed that this is a remarkable milestone and testimony of the hard work of health workers, government officials and others involved in the campaign.

"We cannot stop until the most vulnerable family of Angola is safe. We are all together in supporting the global vaccination campaign. UNICEF will not leave any stone unturned to support the Government of Angola in their efforts,” he said.

In Angola, around 30 000 doses of vaccine are currently being administered daily, with the expectation of reaching the target of at least 20% of the population by the end of the year.

However, the challenge of scarcity and inequality of access to COVID-19 vaccines may slowdown the country’s vaccination drive. WHO, UNICEF and other COVAX partners renew their appeal to the international community to accelerate dose sharing of excess vaccines and the promotion of their production worldwide.

COVAX is co-led by Gavi, the Vaccine Alliance, WHO and the Coalition for Epidemic Preparedness Innovations (CEPI), working in partnership with UNICEF as well as the World Bank, civil society organisations, manufacturers, and others.

COVAX is part of the Access to COVID-19 Tools (ACT) Accelerator, a ground-breaking global collaboration to accelerate development, production, and equitable access to COVID-19 tests, treatments, and vaccines.