Brazzaville 18 April 2018 - An evaluation carried out by the World Health Organization (WHO), US Centre for Disease Control (CDC), and country partners shows that administering monovalent rotavirus vaccine to African infants does not increase the risk of intussusception above base line levels. Intussusception is a form of bowel obstruction in which a part of the intestine folds into the section next to it. Seven countries in the WHO African Region using monovalent rotavirus vaccine participated in the evaluations, which enrolled a total of 1060 infants under one year old with intussusception.

“These studies conducted in the African Region can serve as a model for other regions where wide-scale rotavirus vaccine introductions are just beginning and surveillance is ongoing as part of the WHO-coordinated Global Rotavirus Surveillance Network. The results of the studies provide evidence of the impact and effectiveness of rotavirus vaccination,” said Dr Matshidiso Moeti, the WHO Regional Director for Africa.

Rotavirus is a contagious virus that can cause gastroenteritis (inflammation of the stomach and intestines). Symptoms include severe watery diarrhea, often with vomiting, fever, and abdominal pain. Infants and young children are most likely to get rotavirus disease. They can become severely dehydrated and need to be hospitalized and can even die. You can protect against rotavirus disease with safe, effective vaccination.

Sometimes intussusception occurs naturally and there have been cases of its occurrence (1-6 cases per 100,000 vaccinated children) in the first week following the first dose of vaccine in several high and middle income countries. As a result of this, WHO strongly recommended the establishment of intussusception surveillance to monitor the safety of the new rotavirus vaccine in routine immunization.

In collaboration with the US CDC and GAVI Vaccine Alliance, 12 countries were supported to conduct intussusception surveillance using monovalent and pentavalent vaccines, respectively.

The survey involved active weekly identification cases of intussusception by consultant pediatricians and surgeons at major pediatric hospitals in the largest urban areas of the participating countries.

The results of the study published today in New England Journal of Medicine (NEJM) showed that unlike reports from high and middle income countries, there is no increased risk of intussusception with either dose of Rotarix  in the countries .

Dr Felicitas R Zawaira, Director of the Family and Reproductive Health Cluster at the WHO Regional Office for Africa said: “The absence of the intussusception risk in African countries is reassuring, particularly given the large public health benefits of rotavirus vaccination as demonstrated by ongoing rotavirus vaccine impact evaluation”

WHO recommended that all infants be routinely immunized to prevent rotavirus disease, the most common cause of serious gastroenteritis among infants worldwide. Thirty –three countries in the WHO African Region introduced rotavirus vaccines in the national immunization programs.

“Rotavirus is a major cause of illness and death among infants in sub-Saharan Africa,” said Dr. Mark Pallansch, director of the Division of Viral Diseases at the U.S. Centers for Disease Control and Prevention. “Countries with routine use of rotavirus vaccine are making great strides to protect all children and reduce deaths from rotavirus disease.” 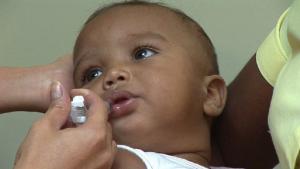 A child being vaccinated against rotavirus
Credits
Click image to enlarge