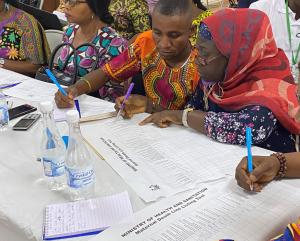 Maternal mortality remains a major concern in Sierra Leone. Recent statistics show that maternal mortality accounts for 36 percent of all deaths among women age 15-49 in the country. This makes Sierra Leone one of the countries in the world with the highest life-time risk of women dying at pregnancy or childbirth.

To address this problem, maternal mortality has been under a major spotlight over the past few years and has attracted huge technical and financial investments to keep women from dying. In 2015, the Ministry of Health and Sanitation with the support of the World Health Organization and other partners developed national Maternal Death Surveillance and Response (MDSR) guidelines that led to the establishment of national and district level MDSR committees nationwide. This was to ensure that MDSR is built on already existing programs for maternal death reviews where each maternal death is reviewed by a local maternal death review committee to examine the medical and non-medical factors contributing to the maternal death..

To improve the reporting of maternal death, MDSR  has been integrated into the public health Integrated Disease Surveillance and Response (IDSR) system. Hence, maternal death is reported through the IDSR, MDSR and District Health Information Software systems.

“We are seeing promising progress in reduction of maternal mortality and this is because of the strong leadership of the Ministry of Health and Sanitation (MOHS) and collaboration of partners including communities, clinics, hospitals, district health management teams and Health Development Partners. Nearly all maternal deaths are now investigated and reviewed, and a robust response is mounted to address issues identified”, says Dr Fatu Forna, Technical Advisor at the WHO Country Office in Sierra Leone. Voluntary blood donation by community members is also gradually being accepted by communities championed by local leaders such as Paramount Chiefs in some districts.

For the last four years, WHO has been leading data collection, compilation and analysis of annual MDSR reports. However, as part of the Organization’s traditional role of capacity building and skills transfer for sustainability of progress, WHO supported the MoHS to bring together District Surveillance Officers, Monitoring and Evaluation Officers and MDSR focal persons to a workshop where they shared MDSR 2019 data and developed action plans to continue to prevent maternal deaths. On 20 February, a total of 70 MoHS district health personnel and national officials shared MDSR data from their respective districts and were supported to start development of the National MDSR Annual Report for 2019.

The primary goal of MDSR is to reduce preventable maternal mortality through a systematic action and surveillance cycle of identification, notification, investigation and review of maternal deaths. This is to ensure that the findings would inform robust response to improve quality of care and prevent future deaths. WHO and partners with funding from the UKaid through the DFID Saving Lives Project have been supporting the Ministry of Health and Sanitation to improve the quality of care and prevent the death of women and children in Sierra Leone