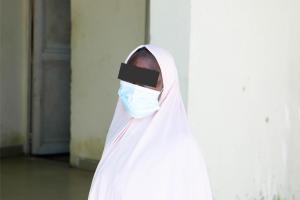 Maiduguri October 6, 2021- It was a normal day for 62-year-old Hajara A.M., full of life queuing to get her free medication at Herwa Peace Primary Health Care Center (PHC) in Maiduguri, Borno state.

Hajara, a patient with Post-Traumatic Stress Disorder (PTSD) could not hide her excitement upon meeting the World Health Organization (WHO) sponsored team who provided technical support and medication for mental health patients. “If not for this programme, (referring to the WHO intervention) and free medication I have been receiving, I would not have been here talking to you today. Due to their intervention, I have become completely sane now and fully recovered” she says.

“When I first I went to the WHO clinic I was given: a combination of medicines and psychotherapy. Since then, I have met regularly with a psychologist. I am now ok and I am working as a domestic maid to earn a living.”

Narrating her ordeal, Hajara stated that “in 2015, my world fell to pieces. Many painful and complicated events from insurgency resulted in episodes of psychosis, which shattered me. All my inner resources ran out and I wished I had never been born. I considered committing suicide, I didn’t know where I was or what I was doing, I could not sleep nor eat.”

“My sister’s husband was killed by the Insurgents at Doron Baga, Borno state in my presence, I could not bear it. Just when I thought I had seen it all, my younger brother, who was 33 years old was also killed, the killing of my two daughters followed and that almost made me lose my mind. We were forced out of Doron Baga with nothing, our houses burnt, our animals killed and our belongings confiscated by the insurgents.” Immensely affected by the insurgency, residents were forced to relocate to other parts of Borno, including Maiduguri

Baga is approximately 196 km from Maiduguri, the capital of Borno State. The "Doron Baga" fish market is located about six kilometers from the town. Baga lies on the border of Lake Chad and was a fishing center itself in the 1960s and 1970s, but the diminishing size of the lake had caused fishermen to move away, and others had turned to subsistence farming.

“Upon my arrival in Maiduguri in 2017, some good Samaritans took me to a psychiatric hospital as my condition was worsening. I was diagnosed with PTSD, but could not afford the medications, so I was forced to continue living with the condition.”

In October 2020, we came across some strangers that told me about a clinic that gives free consultation and medications to people living with mental health conditions here in Maiduguri. It is a Primary Health Care Center (PHC) named Herwa Peace center.

“When I was taken there, I didn’t know what I was doing, but I knew I had gone to the right place. Whenever I go for a consultation, I felt safe staying at the PHC rather than at home and was treated with care and understanding. The professionals counseled me and made me forget all my problems. We had serious conversations and they made me understand there is more to life than the thoughts of suicide.  And within three weeks into my journey, I was sane, able to sleep, and had hope in life”

Due to insurgency in North-Eastern Nigeria, the population’s mental health needs were significantly increased, local mental health care resources are grossly inadequate. Relying solely on these local mental health resources to provide services for people affected by mental, neurological and substance use (MNS) disorders would prevent a large number of people from accessing the services they need.

To this end, WHO with funding from European Union (EU), USAID and Nigerian Humanitarian Fund (NHF) then included mental health care in its response and came up with a practical way of scaling up mental health care at the community levels in rural and hard to reach areas, and exercising its mandate to provide a comprehensive health care package to the vulnerable population.

From September 2017, 64 low cadre PHC workers were trained on how to deal with mental health patients using the WHO recommended mental health Gap Action Programme (mhGAP). So far, 547 PHC workers have been trained on mhGAP interventions and are being mentored on mental health care by psychiatric nurses conducting outreach care services. Over 90,000 patients with mental disorders have benefitted, with about 64% stable and coming for follow-up care while 36% are coming as new patients.

This support has led to the promotion of mental health, which is crucial to the overall wellbeing, functioning, and resilience of populations recovering from emergencies.