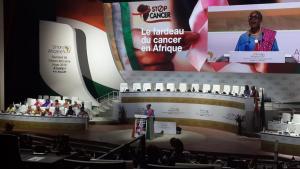 Niamey, Niger 7 June 2019 - The high-level advocacy event on cancer in Africa held in Niamey, Niger on the side-lines of the African Union summit ended with an appeal to African countries to integrate simple cancer interventions such as addressing risk factors as well as screening and early diagnosis at the primary health care level for more equity. The call was made by WHO Regional Director for Africa, Dr Matshidiso Moeti, while addressing delegates at the event.

“Cancer screening and early detection are essential to optimize the investment being made by countries to address cancer,” she said. The Regional Director noted that cost-effective interventions can be implemented, focusing particularly on tobacco control; promoting healthy diet and physical activity; reducing harmful use of alcohol; and reducing air pollution.

She urged countries to take the opportunity offered by the The African Continental Free Trade Area (AfCFTA) to share resources for cancer prevention and control through coordination of services, access to care and pooled procurement of cancer medicines.

Each year, there are nearly one million new cases and over half a million cancer deaths in the African region. By 2040, these numbers will double if firm actions are not taken to address them.

While most African countries are implementing national cancer prevention, treatment and control programmes, stronger inter-sectoral and transnational collaborations have emerged as some of the solutions that will complement ongoing efforts in the continent.

In their remarks, Presidents Mahamadou Issoufou, Idris Déby and Christian Kabore highlighted health as a priority in their national development agendas. They cited examples of progress in health development particularly on cancer prevention and control in their respective countries including free health care for cervical cancer, mobile clinics, public awareness through mobile texting, additional health workforce, establishment of cancer registries and many more. They reaffirmed their commitment to health development and underscored the importance of cooperation in all areas in the fight against cancer in the era of universal health coverage.

“It is only by acting in solidarity that we can achieve progress. If Africa unites we can make progress on cancer,” said President Christian Kabore of Burkina Faso.

Welcoming Dr Moeti’s appeal for early detection, Alain Toledano who was part of a panel discussion and is also president of the Franco-African Cancerology Association said: “It is important to invest not just in treatment but in testing to catch the disease early,” adding that “investment in this area would pay off”.

In a joint communique, read on behalf of fellow First Ladies by Sika Kabore from Burkina Faso, they called for higher taxes on tobacco, alcohol and other cancer producing products. The high-level advocacy event on cancer in Africa was organised by the First Lady of Niger, Dr Lalla Malika Issoufou.