​Ebola, cholera and measles: Triple threats to the poorest communities in the Democratic Republic of the Congo 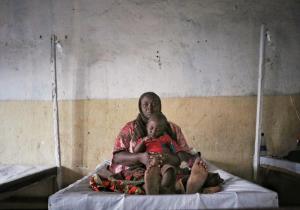 ​Ebola, cholera and measles: Triple threats to the poorest communities in the Democratic Republic of the Congo

Kasika is one of the poorest neighbourhoods in Goma, the largest city in the North Kivu Province of the Democratic Republic of the Congo (DRC). It was in Kasika that Goma’s first case was detected.

But Ebola is not the only disease to scourge the residents of Kasika, who live in close conditions, under tin roofs, with no running water, no flushing toilets and little sanitation. Cholera and measles are also surging through the community.

“Two of my neighbours went to hospital this week. I heard it was measles. Now my baby has cholera. We are really suffering here,” says Rachel Mukandekese, as she sits on a cholera cot – a bed specially designed for cholera patients – in the Kasika health centre, cradling her son, 20-month-old Benediction. He has diarrhoea and is badly dehydrated.

The number of cholera and measles cases has risen across the DRC, including in North Kivu, where the Ebola outbreak has raged for more than a year. Since the start of 2019 in DRC, there have been 183 837 suspected cases of measles and 3667 deaths and 18 201 suspected cases of cholera and 325 deaths. There have been 2576 confirmed and probable Ebola cases and 1760 deaths in that same period.

“Usually, we organize a countrywide vaccination campaign for measles every three years,” says Dr Stéphane Hans Bateyi Mustafa, regional coordinator for the expanded programme for immunization in North Kivu. “But this time we’re late. In North Kivu, many human resources and funding sources were directed into the Ebola outbreak. Other routine activities have been underresourced.”

Measles vaccination campaigns, which involve bringing lots of people together, are also risky in Ebola settings and require putting in place extra measures like temperature screening. This takes up yet more resources.

In Goma, and especially in Kasika, health staff have been overwhelmed by Ebola surveillance and risk communication activities. In just one of Goma’s three health zones, Karisimbi, which contains the Kasika neighbourhood, 1139 cases of measles have been reported since the start of the year. This is double the number of cases for the whole of North Kivu in 2018 and almost five times those in 2017. In addition, since the beginning of 2019; 795 suspected cases of cholera were reported in the same health zone.

Local authorities in North Kivu province, in collaboration with partners, are taking action. With financial and technical support from the World Health Organization (WHO), the Government is strengthening measles surveillance activities, including active case finding and training for health care workers, and increasing cholera and measles awareness-raising activities.

“We have organized a first round cholera campaign designed to reach 800 000 people,” explains Dr Enyegue. In addition, WHO has deployed experts and provided laboratory testing and cholera kits – each of which allows 100 people to be treated for three months.

A scaled-up measles vaccination campaign, with funding from UNICEF and technical support from WHO, is also under way. The campaign aims to reach children born since the previous vaccination campaign and others who may have been missed in routine vaccinations, like 7-year-old Kavera Kasereka, who fell sick with measles recently. Her mother, Esther Bulindwa, thought she was vaccinated as a baby but “has no way of checking”.

The activities focused on cholera and measles are part of a wider effort to strengthen the health system. “We recruited a lot of people at the start of the Ebola outbreak to work in the Ebola response,” says Dr Mustafa. “Now, with support from WHO and UNICEF, we are training these same teams to do routine work in their health zones, too.”

“We call our approach ‘anchoring’,” he adds. “This means, even if there is Ebola, we must not neglect other needs. We must not dismember the system. There are other illnesses we must tackle – other primary health services we must strengthen.”

Thanks to surveillance activities in Kasika, both Kavera and Benediction were seen by health workers and quickly diagnosed. Both are on the road to recovery.

“It is good we are hearing more about vaccinations and about how to keep our children safe,” says Kavera’s mother. “People here don’t have time or money to do it all ourselves. We are busy just trying to get by.”