Delivery in an Ebola treatment centre 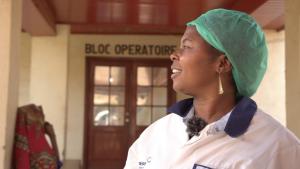 Delivery in an Ebola treatment centre

Beni, 7 April 2020 – In Beni General Hospital in the eastern Democratic Republic of the Congo (DRC), the neonatal ward is full beyond capacity. A row of young women sits on benches outside, proudly holding their newborns. For nurse Espérance Kavira Kavota, this is a welcome return to normal.

For almost a year and a half, nurse Kavota was working full-time in the Ebola Treatment Centre here. In her 28-year career as a nurse, midwife and anaesthesiologist, she had never seen anything like it.

The Ebola epidemic that has ravaged eastern DRC for over 18 months began in nearby Mangina. “Here the common illnesses are malaria, typhoid and tuberculosis. We also have a measles epidemic here,” she says. “We knew there were sick people in Mangina, we didn’t know what it was, people dying with haemorrhage, fever, diarrhoea and vomiting.”

When the country’s 10th Ebola outbreak was declared on 1 August 2018, healthcare staff in Beni got worried. “It was stressful for us. We didn’t really have any protection, we only wore rubber aprons, gloves and masks. First the government, then organizations like Alima and WHO came, and brought their forces together to train us. They taught us how to protect ourselves, how to wear personal protective equipment , how to touch patients, how to keep ourselves and other patients safe.”

Beni rapidly become the epicentre of the DRC’s outbreak, and remained that way for more than a year, mainly due to violence and instability caused by numerous armed groups in the area. Even Ebola treatment centres were attacked. Healthcare workers were under incredible pressure. “It was exhausting and stressful,” says Ms Kavota. As a single mother of two, she was also afraid for her family.

One of the most complicated and risky procedures she had to undertake was helping women give birth inside the Ebola treatment centre. There were eleven such births during the outbreak. “Ebola and pregnancy are enemies. If you give birth, the haemorrhage can kill you,” she says. Out of the 11 births at her treatment centre, eight of the mothers survived, a significant success given the risks involved. With both Ebola patients and survivors, the contamination risk for medical staff is also a danger. Survivors can still pass on Ebola through vaginal fluid, and therefore have to be treated like patients for childbirth. The procedure is exhausting for staff.

“A birth or a caesarean, two hours in personal protective equipment, it was demanding and stressful, you don’t know what result you’ll get, you could do a caesarean that could go wrong because of haemorrhaging. It was 50-50: danger, because you don’t know if you’ll be contaminated, there are needles and scalpels, and when you’re making quick movements, they could go through. But it was also very, very joyful, when you saw a survivor bringing us another new life.”

Ms Kavota is grateful to the experts who taught her and her colleagues, and says the training will benefit her for the rest of her career. “It helped me a lot. Everyone brought their experience to the training. We got lots of equipment that we hadn’t used before and lots of techniques. It’s really helped us. Now we know how to protect ourselves against Ebola and other infections”

Now that Ebola is coming to an end, she can have more time with her family. When she finishes a shift at the hospital, she shops and cooks for her son and daughter, both university students, so they can devote themselves fully to their studies. Her son, Patience, is studying economics, and her 22-year-old daughter Florence is following in her footsteps, in her second year of nursing college.

“One day, when I am tired, she’s the one who’ll be saving other people’s lives.”