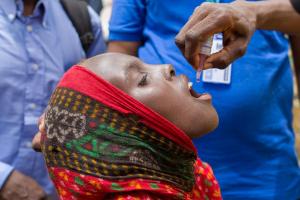 This marks the eradication of the second virus from the face of the continent since smallpox 40 years ago.

“Today is a historic day for Africa. The African Regional Certification Commission for Polio eradication (ARCC) is pleased to announce that the Region has successfully met the certification criteria for wild polio eradication, with no cases of the wild poliovirus reported in the Region for four years,” said Professor Rose Gana Fomban Leke, ARCC Chairperson.

The ARCC’s decision comes after an exhaustive, decades-long process of documentation and analysis of polio surveillance, immunization and laboratory capacity of the region’s 47 member states, which included conducting field verification visits to each country.

In 1996, African Heads of State committed to eradicate polio during the Thirty-Second Ordinary Session of the Organization of African Unity in Yaoundé, Cameroon. At the time, polio was paralyzing an estimated 75,000 children, annually, on the African continent.

In the same year, Nelson Mandela with the support of Rotary International jumpstarted Africa’s commitment to polio eradication with the launch of the Kick Polio Out of Africa campaign. Mandela’s call mobilized African nations and leaders across the continent to step up their efforts to reach every child with polio vaccine.

The last case of wild poliovirus in the region was detected in 2016 in Nigeria. Since 1996, polio eradication efforts have prevented up to 1.8 million children from crippling life-long paralysis and saved approximately 180,000 lives.

“This is a momentous milestone for Africa. Now future generations of African children can live free of wild polio,” said Dr Matshidiso Moeti, WHO Regional Director for Africa. “This historic achievement was only possible thanks to the leadership and commitment of governments, communities, global polio eradication partners and philanthropists. I pay special tribute to the frontline health workers and vaccinators, some of whom lost their lives, for this noble cause.”

“However, we must stay vigilant and keep up vaccination rates to avert a resurgence of the wild poliovirus and address the continued threat of the vaccine-derived polio,” said Dr Moeti.

While the eradication of wild poliovirus from the WHO African Region is a major achievement, 16 countries in the region are currently experiencing cVDPV2 outbreaks, which can occur in under-immunized communities.

“Africa has demonstrated that despite weak health systems, significant logistical and operational challenges across the continent, African countries have collaborated very effectively in eradicating wild poliovirus,” said Dr Pascal Mkanda, Coordinator of WHO Polio Eradication Programme in the African Region.

“With the innovations and expertise that the polio programme has established, I am confident that we can sustain the gains, post-certification, and eliminate cVDPV2,” added Dr Mkanda.

“The expertise gained from polio eradication will continue to assist the African region in tackling COVID-19 and other health problems that have plagued the continent for so many years and ultimately move the continent toward universal health coverage. This will be the true legacy of polio eradication in Africa,” said Dr Moeti.

Thanks to the dedication of the Global Polio Eradication Initiative, polio cases have reduced by 99.9% since 1988, bringing the world closer than ever before to ending polio. The initiative is a public-private global partnership comprising national governments; WHO; Rotary International; the United States Centers for Disease Control and Prevention; UNICEF; the Bill & Melinda Gates Foundation; Gavi, the Vaccine Alliance; and a broad range of long-term supporters.

Polio is a viral disease that is transmitted from person to person, mainly through a faecal-oral route or, less frequently, through contaminated water or food, and multiplies inside the intestines.

While there is no cure for polio, the disease can be prevented through the administration of a simple and effective vaccine. That is why efforts are underway across every country to rapidly boost immunity levels in children and protect them from polio paralysis.

The WHO Regional Director for Africa appointed the 16-member Africa Regional Certification Commission for Polio Eradication in 1998 with the mandate to oversee the certification process and act as the only body to certify the African Region to have eradicated the wild poliovirus.

About circulating vaccine-derived poliovirus in the African Region

The first stage of this targeted strategy involved launching a rapid response team specifically to respond to circulating vaccine-derived polioviruses. Formed in September 2019, the team is coordinated from WHO’s Regional Office for Africa in Brazzaville and is composed of 20 experts in operations and vaccination management, epidemiology, logistics, and communications, drawn from GPEI’s core partners.

Even one case is an outbreak which requires immediate action. Every time a new polio outbreak is confirmed or even suspected in the African Region, the team is dispatched to the country within 72 hours. They quickly get to work, putting together the building blocks in place for a six-month outbreak response. Outbreaks are usually rapidly stopped with 2 to 3 rounds of high quality supplementary immunizations.