Polio Eradication-A Battle I fought with undiluted passion, says Professor Oyewale Tomori, a major player who made this feat possible 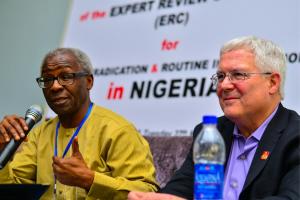 Polio Eradication-A Battle I fought with undiluted passion, says Professor Oyewale Tomori, a major player who made this feat possible

Abuja, 25 August, 2020 - At 74, Professor Oyewale Tomori is the leading virologist who helped spearhead Nigeria’s efforts to kick polio out of the country, a feat that was accomplished in June 2020 after decades of efforts.

A multiple-award-winning specialist in human, zoonotic and veterinary viruses including the poliomyelitis virus and immediate-past president of the Nigerian Academy of Science, Professor Tomori was appointed as the Regional Virologist for the WHO Africa Region in 1994 where he set up the African Regional Polio Laboratory Network, a first-of-its-kind system of laboratories that provided diagnostic expertise to the Global Polio Eradication Initiative (GPEI). He was subsequently appointed as the chairman of the Nigeria Expert Review Committee on Polio Eradication and Routine Immunization in 2004 to date, a high-stakes role where he was charged with ensuring Nigeria defeats polio at all costs.

Nigeria has fought a long and hard battle with the poliomyelitis virus. Polio eradication efforts have been ongoing in the country since 1996 but several backslides delayed progress.
However, in June 2020, after years of monitoring the wild poliovirus and recording no cases, WHO declared Nigeria polio-free. It was the last polio-endemic country on the continent. The WHO is set to certify Africa polio-free in August 2020.

Here, Professor Tomori narrates what the long journey to a polio-free Nigeria was like.

The journey to eradicating polio from Nigeria was a long and arduous task. It began in 1977 when the World Health Organization (WHO) adopted the Universal Child Immunization Program. The goal was to vaccinate every child in the world against measles, tetanus, whooping cough, diphtheria, tuberculosis, and polio by 1990. But by the deadline - 1990, Nigeria was struggling to achieve the 80% overage target.

That was when I got on board. I was appointed as a member of a team set up to ensure that we achieved the target. Though Nigeria was widely reported to have hit the mark, many states did not meet the criteria and it was my job to make sure all states recorded zero polio cases.

Before my deployment, I worked with the WHO Africa regional office from 1994 to 2004. There, I helped set up the polio laboratory network, the forerunner for diagnostic laboratories used to test other viruses including the Lassa fever virus and the Ebola virus. And before my WHO role, I headed the Department of Virology at the University of Ibadan where I was actively involved in isolating polioviruses from children, especially from cases of paralysis in children treated at the outpatient clinic of the University’s hospital.

In 2004, when I returned to Nigeria from the WHO regional office, I became a member of the Nigeria Expert Review Committee (ERC) on Polio Eradication and Routine Immunization. The first meeting was in 2004, and I attended as a member of the committee and acted for the Chairman who was unable to attend.

Later, I became Chairman myself. I remained in that position until Nigeria was declared polio-free at the June 18, 2020 meeting of the African Regional Polio Certification (ARCC) where I am also a member. The ERC met quarterly and held a total of 37 meetings before Nigeria attained wild polio-free status.

Facing the challenges in eradicating polio from Nigeria

There were many obstacles. Accessing some areas was difficult and we struggled to reach some populations. Then in 2003, we had the vaccine boycott in Nigeria where some states, because of distrust, refused to allow children to take vaccines. Unfounded rumours had spread that immunization caused infertility. By 2004, even though the boycott issue had been resolved, vaccine uptake remained very low especially in many northern states where most of the polio cases were being reported. In Kano alone, 3.7 million children went unvaccinated. It was a huge setback. The armed conflict in the north that has now displaced some 2 million people, only compounded the problem.

In the beginning, the ERC’s recommendations were not taken seriously and it was considered undiplomatic to be critical of the government. The quarterly meetings became routine talk shops. The more meetings we had, the higher the number of polio cases we recorded.

When I worked at the WHO regional office, it was my weekly duty to tally the number of polio cases detected in all African countries. It was always so painful and embarrassing to see Nigeria account for more than 50% of all polio cases in Africa.

The desire to see no child paralysed by polio and the national pride to see my country free of wild polio challenged me to work harder.

The ERC recommendations continued to be disregarded until the committee decided to start briefing the Minister of Health at the end of each quarterly meeting. We also concluded to have a media briefing at the end of our meetings. Often, we published op-eds on the performance of government and the status of polio eradication in Nigeria. It was easier to write truthfully and pungently since I was not a government employee.

Gradually, the government started to take the ERC seriously because we began to hold the Minister of Health accountable at our briefings by highlighting which of  our previous recommendations had been implemented. At those briefings, we identified successes and areas that needed urgent government attention and we called out the government for not providing funding and for lacking political will and commitment.

Unfortunately, some of our colleagues made the supreme sacrifice with their lives in the line of duty, caught in unrest in some parts of the country. Over the 16 years in which I served as the ERC chairman, I had the rare and unique opportunity to work with distinguished, committed and highly enthusiastic people – field workers, programme officers, partners- all united by the common purpose to rid Nigeria of wild poliovirus and see that Nigerian children are protected from vaccine-preventable diseases. Their sacrifices gave me the will to overcome the challenges I came across.

Fighting the urge to give up

There were some really low points when I thought that eradication was impossible: the vaccine boycott, the unending armed conflict in the north, waning commitment from governors, election crises and the usual nonchalant attitudes to healthcare delivery in Nigeria.

Perhaps the saddest day for me was when two years after reporting zero polio cases, we found four new cases in 2016. We had to start a new three-year journey.

I went to bed that night with almost all hope lost but I woke up the next morning with renewed energy. I reminded myself that there was a time when polio-paralysed children could be seen in many parts of Nigeria, when states reported an average of 3 cases a day and now the entire country was reporting cases of polio fewer than the fingers on my left hand.

So I rose and told myself that giving up is not an option. I thought of all the years invested in polio eradication and resolved to fight to the end. I asked myself - If you give up now, what would you have to show for all the efforts, all your big talk? How about the lives lost? The children that will remain paralyzed for the rest of their lives?

On 18th June 2020, when the ARCC declared Nigeria polio-free, I shed some tears. I have shed tears of sorrow for my country before but this was one occasion where I was glad to shed tears of joy after thinking of the years, the efforts, the resources, the pain, the agony and the loss of life.

Above all, I thought of all the people who worked to make this possible. For each of them, the tears of joy flowed freely. I did not know I still had any more tears left in me. I had to force myself to stop, to save some joyful tears for the day when good governance will ensure universal health care for all and when high-quality healthcare is accessible and available to every Nigerian.

How did we finally succeed? For me, the game-changer was the establishment of the Emergency Operation Center (EOC). It brought immediate and real-time solutions to routine problems. It moved us from delayed response to immediate action to positively address day to day problems. We also used innovative methods to vaccinate hard-to-reach children like our ‘hit and run’ operations where we entered areas temporarily or permanently abandoned by armed groups or when we used satellites to map safe zones. Some of these innovations have already been adapted to improve routine immunization programmes. The hope is that we move from emergency to routine operation centres to address immunization and to expand monitoring of other diseases.

Lessons learned on the zero-polio journey

I remember writing an editorial where I asked: Will Nigeria be the last country in the world to eradicate polio? It took 24 years to get the answer - a big no. It took great efforts from our partners too. From them, I learned that working together, we can make the world a better and safer place for us all.

I also learned that nothing good and beautiful is beyond our reach and that we must learn to let our reach exceed our grasp for anything of virtue.

Truly, the joy of seeing Africa Polio-free has drastically reduced my age and I feel so young and happy. Sometimes, I cannot find words to describe my feelings. Above all, I appreciate Almighty God that I am alive to see this day.