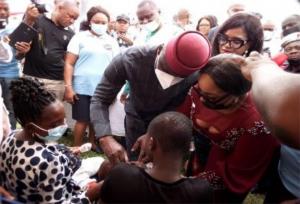 Umuahia, 10 August, 2021 - Abia State located in the south east geopolitical zone, has vaccinated over one million children with the novel oral polio vaccine 2 (nOPV2) in collaboration with the World Health Organization (WHO) and other partners during the second outbreak vaccination response campaign.

“I decided to present my seven months old baby to be vaccinated because I am convinced that the vaccine prevents polio virus from affecting my child”, says 37-year-old Mrs Nnorom Onyinyechi, whose son is within the targeted age group of 0-5 years.

“I am very happy that my child received the vaccine. There has been no side effect. I have been advising my friends and families with children within the age group to take them to the nearest health facilities to be vaccinated also”, she added.

While Nigeria and the entire WHO African Region got wild poliovirus-free certification in August 2020 by the African Regional Certification Commission, it remains affected by circulating Vaccine Derived Poliovirus type 2 (cVDPV2) outbreaks.

It is on record that Abia state interrupted WPV in August 2009; the last case being an 18 months’ girl from Isialangwa South LGA of the state. Since then, the state has been free of WPV as well as other polio variants until April 2021 when the presence of cVDPV2 was confirmed in an environmental sample collected from Ogbor Hill site, Aba North LGA situated within an international market.

In order to muster a strong and quality vaccination response, WHO supported the state government to conduct a well-planned flag-off to kick start the second-round outbreak response vaccination on 30th July 2021.

The detection of cVDPV2 anywhere underscores the importance of maintaining high levels of polio vaccination coverage at all levels, to minimize the risk and consequences of any poliovirus circulation.

Meanwhile, WHO State Coordinator (SC), Dr Linus Okoro said with this new wave of support, WHO will continue to support the government of Abia to build on the successes of the polio eradication initiative and strengthen routine immunization.

According to the SC, other “Outbreak response activities started in the affected areas of Abia after the cVDPV2 was confirmed in the environment in order to boost population immunity and interrupt transmission of the virus. Active search for any additional cases continues, as well as additional surveillance measures such as increase in sewage sample collection frequency and systematic sampling of healthy children.”

For the records, no case of wild polio have been discovered in Nigeria at this time, and the country had not seen any cases since August 2016; leading to the declaration of Nigeria’s wild polio-free status and certification of Africa as wild polio-free in 2020.

Support for polio  immunization to the Government of Nigeria through WHO, is made possible by funding from the Bill & Melinda Gates Foundation, 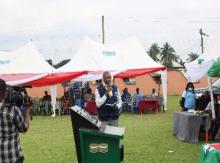