Dr Luis Gomes Sambo, of Angola, was unanimously re-elected by the 59th session of the World Health Organization (WHO) Regional Committee (RC) for Africa as WHO Regional Director for Africa. The 126th session of the WHO Executive Board (EB) re-appointed him to serve a second five-year term from 1 February 2010 to 31 January 2015. His first mandate was from 1 February 2005 to 31 January 2010.

He qualified as a medical doctor from the Faculty of Medicine of the University of Angola and obtained a Diploma of specialist in Public Health from the Portuguese Medical Association. He holds a PhD degree in Management from the University of Hull, UK.

Dr Sambo started his career in 1977 as District Medical Officer at the Municipality of Cacuaco in the Province of Luanda and was the Director of Health Services in the province of Cabinda from 1978 to 1980. He also served as Director of International Cooperation at the Ministry of Health in Luanda from 1981 and 1983.

He was appointed Vice-Minister of Health in 1983, a position he held for five years. As the Angolan Vice-Minister of Health, he was Chair of the National Health Committee; Coordinator of the public hospitals in Luanda; and Supervisor of the areas related to Disease Control, Mother and Child Health and Human Resources for Health.

He joined WHO in 1989 as Chief of the Inter-Country Strategic Support Team in Harare, Zimbabwe, where he oversaw technical support to strengthen health systems in the Southern African countries. In 1990, he was assigned to Guinea Bissau as WHO Country Representative.

Awards and distinctions conferred on him in recognition of his contribution to and achievements in the field of public health include the following: Certificate - Who’s Who in Medicine and Healthcare, Seventh Edition 2009-2010 by the Marquis Who’s Who Publications Board, USA; Honorary Doctorate (Doutor Honoris Causa) from Universidade Nova de Lisboa – Portugal in 2012; ’Officier de l’Ordre National de la Valeur’ of the Republic of Cameroon in 2012; ‘Commandeur de l’Ordre National du Mérite du Benin’ in 2012;  Officier de l’Ordre of Burkina Faso in 2010; Doctor Honoris Causa by the University of Kinshasa, DR Congo in 2009; Silver Plate award by the Angolan Medical Association in 2008; Commandeur de l’Ordre de Madagascar in 2007 and the ‘Médaille d’Or de la Santé Publique’ by the Republic of Niger in 2006.

He is fluent in spoken and written Portuguese, French and English. 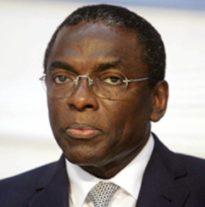