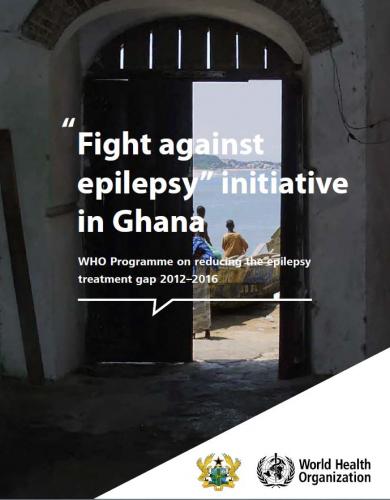 "Fight against Epilepsy" Initiative in Ghana

Epilepsy is a chronic noncommunicable disease of the brain that affects 65 million people worldwide. It accounts for 0.6% of the global burden of disease. Nearly 80% of people with epilepsy live in low- and middle-income countries, about 75% of whom do not receive the treatment they need. Building on the Global Campaign Against Epilepsy, WHO in 2012 launched the WHO Programme on reducing the epilepsy treatment gap, with the aim of improving access to epilepsy care and services and the overall goal of reducing epilepsy treatment gap in low- and middle-income countries.In Ghana, it is estimated that 1% of the population live with epilepsy, representing 270 000 people, with a treatment gap of 85%. It is in that context that the Ghana Ministry of Health, in collaboration with WHO, launched the Fight against epilepsy initiative in 2012. The goals of the five-year project were to improve the identification and management of people with convulsive forms of epilepsy within the existing primary health care system and to develop a model of epilepsy care at the community level that could be scaled up nationwide. The project was implemented gradually across five regions comprised of 10 districts1 and 55 hospitals and clinics, in the following steps: (i) developing a strategy for delivering epilepsy care, (ii) training health care workers and volunteers, (iii) raising awareness and educating communities, (iv) engaging traditional and faith healers and
(v) strengthening monitoring and evaluation of epilepsy.