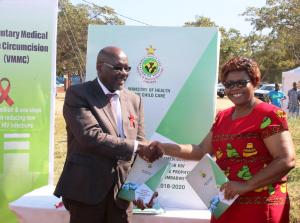 Last week at a function held in Harare, Zimbabwe celebrated reaching One million men for Voluntary Medical Male Circumcision (VMMC) and the launch of the Pre-Exposure Prophylaxis (PrEP) Strategy. These two important milestones are an indication of the leadership in the area of HIV prevention that the Ministry of Health & Child Care has demonstrated in the region. Zimbabwe has made tremendous progress in the HIV response and as there is momentum towards the last mile, the need to strengthen focus on HIV prevention cannot be over emphasised, and both VMMC and PrEP are key interventions. The launch was attended by the Minister of Health and Child Care, senior Government Officials, members of the UN family, development partners and civil society representatives.

At least one million Zimbabwean men have been circumcised, a development that will scale up the country’s progress towards reaching the global 2030 HIV targets. According to the Ministry of Health and Child Care, 1 144 061 men have undergone VMMC so far, a figure that is likely to go up by the end of 2018. Zimbabwe is now approaching its VMMC target of 80% which translates to 1.3 million men circumcised, and should now plan in earnest to continue providing the VMMC service in a way that maintains or exceeds the 80% coverage in a sustainable way. Both WHO and UNAIDS recommend that going forward VMMC programs should focus on young adolescent boys. This is an important opportunity to provide more than just VMMC but to offer comprehensive health services for adolescents. Through VMMC, health workers can help to shape responsible social and health behaviours among adolescents. They can also help to shape positive gender norms which will contribute towards the goal of ending AIDS by 2030. This new VMMC strategic direction will require inter-sectorial collaboration, including partnering with schools as well sporting services among others.

Pre-exposure prophylaxis is a relatively new approach to HIV prevention for people at substantial risk of HIV infection as part of combination prevention approaches. The Minister of Health and Child Care Dr David Parirenyatwa said the oral PrEP was strictly for those who were at a higher risk of contracting HIV.   “I would like to emphasise now that PrEP is not for everyone and neither is it a morning after pill, it is strictly for those who are at a higher risk of contracting HIV,” said Dr Parirenyatwa.

In a statement, the UN Resident Coordinator, Mr Bishow Parajuli commended the Government of Zimbabwe, particularly the Ministry of Health & Child Care for these two important milestones. “It is commendable to see the HIV program taking leadership in ensuring that these interventions are widely available throughout Zimbabwe,” he said. He also urged the ministries, development partners and stakeholders to work collectively to transform the Prep strategy into practical programme activities. “It is possible to end AIDS by 2030 if we all take part,” said Mr Parajuli.

Zimbabwe launched a VMMC campaign in 2009 aiming for 1.3 million men by 2015 after studies showed that circumcision reduced the risk of contracting HIV BY 60%.