Why genomic sequencing is crucial in COVID-19 response 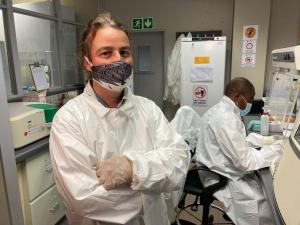 Why genomic sequencing is crucial in COVID-19 response

Cape Town - In December 2020, South Africa detected the Beta variant and in May 2021 the Delta variant, thanks to robust genomic surveillance. Professor Tulio De Oliveira, a renowned bioinformatician who identified the Beta variant, explains the criticality of genomic sequencing. Professor De Oliveira is the Director of the KwaZulu-Natal Research Innovation and Sequencing Platform (KRISP) and Centre for Epidemic Response and Innovation (CERI) based in South Africa.

How crucial is genomic sequencing to COVID-19 response?

Genomic sequencing has been very important for the COVID-19 response. New variants are forming all the time, so genomic data has guided countries to make quick and informed public health decisions since the start of the pandemic. For example, we immediately informed our Ministry of Health and our President Cyril Ramaphosa when we discovered the Beta variant in South Africa very early in our second wave. Within a day, new legislation was drafted so the country could be put on a higher lockdown level to curb infections and save lives. It took less than 48 hours of knowing about the new variant to do that. and it was the same with the Delta variant in the third wave.

The value of genomic sequencing for public health response goes beyond just knowing when to go into lockdown. It can help counties prepare for potential surges and take important steps such as increasing oxygen supply, opening more hospital beds or ramp up testing because these are variants that are more transmissible. It has also been crucial to help countries to select the most appropriate vaccines to be used in the African context. Vaccine hesitancy is a huge problem, so we must get it right the first time and ensure the vaccines that are rolled out are the most effective option available. Genomic data basis of South Africa’s decision to use Johnson & Johnson and Pfizer COVID-19 vaccines.

There are also steps that countries can make to respond to new variants, without their genomic data. Angola has been a very good example of using simple public health responses prevent variants from entering the country. Through point of entry testing of all travellers, the country has been able to isolate most positive cases and slowed down the spread of these more dangerous variants of concern without imposing a travel ban. Travel bans are very costly economically, but a good triage system and testing at point of entry is almost as effective. I think the world can learn a lot from this strategy and from Dr. Silvia Lutucuta, Minister of Health, and Dr. Joana Moraes, Director General of Health in Angola.

What advancements are being made in genomic sequencing in Africa?

Genomic surveillance is advancing quite fast in Africa and has grown considerably this year. The continent is getting close to sequencing up to 50 000 genomes. At the beginning of the year, we had not even reached 10 000 genomes. This five-fold increase is the fruit of a great deal of investment and capacity building since the beginning of the pandemic. There are several great success stories of countries that are well established, such as South Africa, Angola, Nigeria and Kenya, and countries that are catching up quickly, like Botswana.

At KRISP & CERI we really believe it’s important to scale up genomic sequencing in the region in a wholistic and sustainable way working with partners like WHO and Africa Centres for Disease Control and Prevention (Africa CDC). KRISP and CERI do genomic sequencing for many African countries, but we also share all our protocols with countries, as well as offering to train technicians to boost their capacity.

Malawi recently sent a couple of technicians to our facilities to learn, and within a week of their return, the country already started producing its own data. Another example is Uganda which has been sequencing a lot with Oxford Nanopore Technologies, but the country recently sent two senior scientists to our lab to learn about Illumina sequencing. Now there are two different platforms that are established in the country.

How can genomic surveillance be improved in the region?

At the national level, it’s essential for countries to create a functioning laboratory network involving national public health institutes, academic institutions and the private sector. The truth is that no national public institute of health can manage on their own. By having a system involving academic organizations and private sector, countries can tap into a bountiful network of facilities that already exists. This is something we implement in South Africa which we picked up from the United Kingdom. It has proven to be highly efficient and effective.

Partnerships at the regional level are also very important. The Sequencing Laboratory Network for COVID-19 and Emerging Pathogens set up by WHO and Africa CDC last year is an example of one of the initiatives available to countries to build capacity and sharpen their skills. There are three tiers of laboratory networks being developed in the Region. We have the specialized genomic centres (such as CERI-KRISP), the Regional genomics facilities and then you have the national laboratories. African countries should make efforts to be as active as possible at all three levels. This not only boosts genomic sequencing data but really facilitates the transfer of knowledge and training – which is important for sustainability.

Communication between countries is also extremely important. There is a wealth of experiences, knowledge and capacity across Africa.

Beyond the pandemic, how can genomic sequencing help tackle other health problems?

Genomic surveillance is not new. We have been using genomic surveillance to understand transmission and drug resistance of pathogens like HIV and tuberculosis. Dengue, Chikungunya and Yellow Fever Virus are good examplesof how efforts to identify the genotypes of variants has helped us select the best possible diagnostics, vaccines and therapies. This field has also proven to be important to identify new zoonotic transmission of diseases such as Ebola, Marburg and Lassa Fever. But this is just the tip of the iceberg.

There is so much value in genomic surveillance for public health in Africa and we must continue to invest in these three-tiers of laboratories and work to help and support each other. The spotlight is on COVID-19 now, but we must seize this opportunity to build sustainable infrastructure for the future.