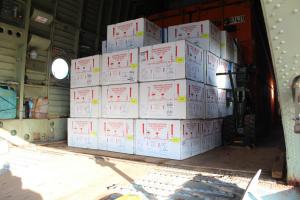 Juba, 11 May 2018 – To reduce the risk of cholera outbreaks in South Sudan, the World Health Organization (WHO), with the Ministry of Health and partners, is targeting to immunize 854 469 people against cholera in South Sudan’s endemic ‘hot spots’ in the first half of 2018.

The oral cholera vaccine (OCV) campaigns are underway to reduce the risk of cholera outbreaks as the rainy season begins. Since January 2018, a total of 60 614 people vaccinated in the first round of OCV campaigns in Malakal PoC and Wau IDP sites and 173 480 people vaccinated in the second round of OCV campaigns in Malakal Town and Malakal PoC, Aburoc IDP site, Wau IDP sites and Budi County.

The second round OCV campaign for Juba is currently underway targeting to immunize 206 292 people. For the vaccine to be most effective people need two doses.

“These OCV campaigns are critical for preventing recurrent cholera outbreaks in endemic areas,” said Dr Wamala Joseph, Epidemiologist at WHO South Sudan. “They provide protection in the immediate term and serve as a bridge to rolling out long-term and sustainable water, sanitation, and hygiene (WASH) interventions in cholera hotspots.”

OCV campaigns, along with WASH and other interventions including reinforced messages on safe drinking water, hygiene, and sanitation, is critical to reverse the current cholera trend in South Sudan and achieve the global target of attaining a 90% reduction of cholera deaths by 2030.

“We appreciate the financial support from Gavi, and the International Coordinating Group (ICG) on vaccine provision, which brings together WHO, UNICEF, Medecins Sans Frontieres (MSF), and the International Federation of the Red Cross (IFRC),” said Mr Evans Liyosi, WHO Representative a.i. to South Sudan. “These efforts are critical now as the rainy season is starting in most parts of the country.” 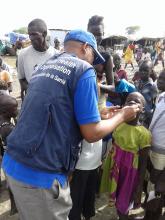