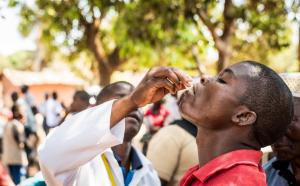 The Government of Zambia has launched a campaign on Wednesday (January 10) to vaccinate residents of Lusaka against cholera with support from the World Health Organization and partners.

Two million doses of the oral cholera vaccine from the Gavi-funded global stockpile were delivered to the southern African country in January, enough to immunize 1 million people.

According to Health Minister Dr Chitalu Chilufya, the campaign will bring the life-saving oral cholera vaccine to the people who need it most. He also highlighted the role that communities can play in preventing the spread of the disease. “Communities should not ignore basic preventative measures because the key drivers of this epidemic include consumption of contaminated water and food, poor waste management, and poor personal hygiene practices which have to change,” said Dr Chilufya.

Cholera is an acute diarrhoeal disease that can kill within hours if left untreated. Since the start of the current outbreak on 4 October 2017, the Ministry of Health reports that there have been a total of 2,672 cases, with Lusaka alone accounting for 2,558 cases. There have been 63 deaths countrywide, 58 of which in Lusaka.

WHO is working with the Zambia National Public Health Institute (ZNPHI) to address the underlying causes of the cholera outbreak: clean water provision, sanitation and health education on personal hygiene. WHO is also helping authorities to track down cases, treat cholera patients and provide community health education.

Selected vaccination sites in central areas of Lusaka will be targeted under the campaign. WHO has provided training to medical personnel in how to administer the vaccine, as well as on other preventive measures and cholera treatment.

“Zambia is experiencing one of the worst outbreaks of cholera in years,” said Dr. Nathan Bakyaita, WHO Representative to Zambia. “With this campaign, we can stop cholera in its tracks and prevent an even more devastating epidemic.”

While sporadic cases of cholera are regular occurrences in Zambia during the five-month rainy season, the number of cases this year has exceeded the average annual caseload.

WHO recommends that vaccination against cholera be considered in emergencies and other high-risk scenarios where there are increased threats of outbreaks, when combined with standard prevention and control measures for the disease. These measures include readiness to provide adequate testing and treatment, steps to ensure access to safe water and sanitation, and community mobilization to engage the public in preventing infection.

Planning is underway to vaccinate a further 1 million people living in known cholera hotspots across the country later this year.