Addis Ababa, 16 July 2018 – On 12 July 2018, the World Health Organization (WHO) country office in Ethiopia delivered 50 basic Inter-agency Emergency Health Kits (IEHK) of drugs and medical supplies, six IEHK supplementary kits and five IEHK renewable kits containing gloves, needles, syringes and intravenous fluid sets to the Gedeo Health Department in Dilla town of Southern Nations, Nationalities and Peoples Region (SNNPR) Ethiopia to support the zone in its response to the health needs of the internally displaced persons (IDPs) that it is hosting.  The medical supplies and drugs in the 50 basic Inter-Agency Emergency Health Kits (IEHK) will help treat 50 000 people for three months, the six IEHK supplementary kits have medical supplies and drugs to help treat 60 000 people for three months and the five IEHK renewable kits will support the treatment of 50 000 people for three months.

The supplies were delivered during the WHO Representative Dr Akpaka Kalu’s visit to the zone to assess the situation on the ground and meet with zonal and woreda health administration to discuss priority areas that the organization can support with to address the immediate health needs of the more than 800 000 IDPs sheltered in different locations in the zone.

This is the second delivery of medical kits for the response; shipments delivered in June 2018 to the SNNPR Regional Health Bureau had included 11 basic Inter-Agency Emergency Health Kits, one IEHK supplementary kit and one IEHK renewable kit. The earlier shipment also included one Complete Central Reference Kit (medicines and equipment) enough to treat 100 cases of acute watery diarrhea (AWD) to support the region’s AWD outbreak preparedness.

Dr Kalu said during his visit, “WHO has deployed an incident manager, an epidemiologist, surveillance and nutrition experts to the zone to support the response to the health needs of the internally displaced persons and the host community, and will deploy more staff within the coming week,” adding, “The response of the zone is commendable but the need is huge and requires the coordinated and rapid response of WHO and other partners.”

They also attended the inter-cluster coordination meeting of government and partners led by the National Disaster Risk Management Commission (NDRMC) where updates and response plans by various clusters were presented and discussed.  The aim of the meeting was to increase synergy amongst all the response actors.

Dr Kalu noted at the meeting that there is an immediate need to improve living conditions access to safe water, sanitation and hygiene (WASH) at the IDP sites and conduct an immunization campaign at the sites and in host communities to avoid disease outbreaks. “WHO will coordinate with the Federal Ministry of Health, UN agencies, international organizations, NGOs and other partners to strengthen the response, particularly in regards to WASH and vaccination campaigns,” he said.

The SNNPR Health Bureau has repurposed 64 health professionals (nurses and laboratory technicians) from other zones to alleviate the human resource gap in the response to the IDP situation, and will deploy more staff in the coming weeks.  WHO will orient the newly deployed teams and has plans to train a total of 120 health workers in the management of patients with severe acute malnutrition with medical complications.

The WHO surge team based in Gedeo Zone will continue to provide technical support in surveillance and early warning, case management and coordination to the government-led inter-agency rapid response to the situation. 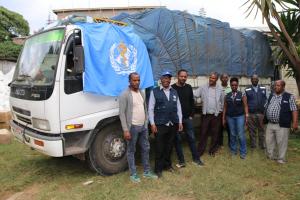