WHO hero laid to rest

4 May 2019, Bafia – With overwhelming grief and respect, Dr Richard Valery Mouzoko Kiboung, a devoted doctor, epidemiologist, husband and father who had worked with the World Health Organization (WHO) for the past five years was buried today in his native Cameroon.

Dr Mouzoko, 42, died from a gunshot wound sustained during an assailants’ attack on 19 April 2019 at Butembo University Hospital, where he was chairing a meeting with front-line health workers battling the Ebola virus disease in the North Kivu Province of the Democratic Republic of the Congo (DRC).

A man described as “ready to fly instantly to help his neighbour”, Dr Mouzoko was leading the WHO response team at the Butembo University Hospital’s Ebola treatment centre, in one of the worst Ebola hot spots in the country.

"The passing of Dr Richard is an enormous loss for WHO and the people of the DRC he was serving when his life was so brutally and senselessly taken away. It’s also an enormous loss for Cameroon, and most of all for his family, who have lost a husband, a father, a son and a brother,” WHO Director-General Dr Tedros Adhanom Ghebreyesus told hundreds of mourners.

“The world of public health and WHO, in particular, lost someone exceptional in that April attack,” said Dr Matshidiso Moeti, WHO Regional Director for Africa. “We enter this profession to help others live healthier lives. We expect long careers and hope to live to see some results of our work. Dr Richard had great impact in his short life and helped make countless lives healthier. He was a doctor, a humanitarian and a hero – an example for us all.”

In his career, Dr Mouzoko worked in areas with low vaccination coverage and contributed towards improving the health of vulnerable communities, like refugees, internally displaced persons and nomadic populations. He also investigated diseases like yellow fever, measles, polio, meningitis, neonatal tetanus and Ebola and organized vaccination campaigns against these diseases.

He spoke eight languages and touched people with a humanity that put others first. He trained hundreds of doctors and health workers to better help the vulnerable communities he cared about. Public health was his passion.

After graduating from medical school at the University of Yaoundé, Dr Mouzoko went on to pursue a master’s degree in public health at the Institute of Tropical Medicine in Antwerp, Belgium. 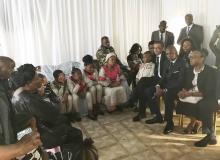 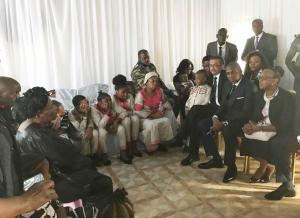