WHO Director-General: invest in health to end plague in Madagascar

8 January 2018, Antananarivo, Madagascar - The Director-General of WHO has outlined his vision for a Madagascar free of plague epidemics during a three-day visit to the island nation that started on 7 January 2018.

"Madagascar can make plague epidemics a thing of the past through strategic investments in its health system – including better access to healthcare, improving preparedness, surveillance and response capabilities, and implementing the International Health Regulations," said Dr Tedros Adhanom Ghebreyesus.

During his first visit to Madagascar since his election as Director-General of WHO last year, Dr Tedros is due to meet with plague survivors and affected families, key Ministers and officials leading response efforts, the President and First Lady, and representatives of UN agencies and health partners. He will also visit a plague treatment centre, and the National Operational and Strategic Centre for Epidemiological Surveillance.

On the first day of the visit, the WHO Director-General thanked national authorities for their leadership and partners for their support during the recent nationwide outbreak of pneumonic and bubonic plague that caused more than 200 deaths over four months.

"This unprecedented pneumonic plague outbreak was contained due to the tireless efforts of Malagasy health workers and partners. WHO will continue to support plague preparedness, control and response, and we call on our international development partners to help us end human outbreaks. This will include better understanding of the wider factors that allow plague to spread, and strengthening national capacities to manage similar emergencies in the future," said Dr Tedros.

Although the acute phase of the epidemic was declared over by health authorities in late November 2017, plague occurs seasonally in Madagascar, usually between September and April each year.

Dr Tedros was accompanied by WHO Regional Director for Africa Dr Matshidiso Moeti who cautioned that the response must be sustained until the end of the plague season and beyond.

"We must sustain a strong alert and response system to rapidly detect and respond to new plague cases as they emerge," said Dr Moeti. "WHO urgently requires an additional US$ 4 million to sustain response operations over the next three months and until April 2018."

When the outbreak was detected in August 2017, WHO rapidly mobilised financial, operational and technical support to Madagascar and neighbouring countries – releasing emergency funds, delivering medicines and supplies, sharing guidelines on case management and safe burials, supporting surveillance and laboratory testing, and strengthening public health measures at ports and airports. More than 4400 people were trained to identify, refer and care for close contacts of plague patients to prevent the disease from spreading.

"With support from WHO and other partners we provided treatment to nearly all identified plague patients and more than 7300 contacts free of charge," said Dr Lalatiana Andriamanarivo, Minister of Health of Madagascar.

Through its Health Emergencies programme, financial support for WHO’s response to the plague outbreak in Madagascar has been provided by the WHO Contingency Fund for Emergencies (CFE) and the governments of Italy, Norway and the Republic of Korea. WHO and the Global Outbreak Alert and Response Network (GOARN) staff deployed more than 135 staff to Madagascar to respond to the outbreak. 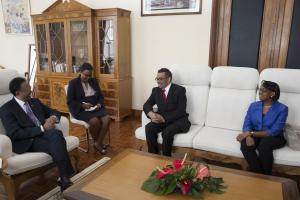 Related Links
WHO Director-General: invest in health to end plague in Madagascar