Geneva, Switzerland, 29 May 2019 – With 93% of all malaria deaths worldwide occurring in the African region, the Principality of Monaco and the World Health Organization (WHO) Regional Office for Africa have forged a new partnership which aims to bring the continent a step closer to a malaria-free Africa.

The partnership which was announced today at the World Health Assembly in Geneva, Switzerland, will see two million Euros disbursed over a five-year period. The funds will support WHO to work with eight countries (Burkina Faso, Cabo Verde, Chad, The Gambia, Mali, Mauritania, Niger, and Senegal) in the Sahel region to accelerate towards malaria elimination. More than 374 million people in the Sahel region are at risk of contracting malaria.

“Only with the generous support of our donors and partners will WHO achieve our shared goal of a malaria-free future in Africa,” said Dr. Matshidiso Moeti, WHO Regional Director for Africa. “Contributions, like this one from the Principality of Monaco, are instrumental in ensuring that we continue to make progress, particularly in those countries which bear the highest malaria burden.”

“The Principality has been supporting WHO health programmes in Africa since 2007. This new investment is in recognition of the huge burden that malaria places on countries in Africa, and the crippling effect of this disease on the socio-economic development of the region,” said Mr. Gilles Tonelli, Government Advisor and Minister of External Relations and Cooperation of Monaco.

The Monaco-WHO grant agreement will contribute to the work of the Regional Office for Africa in providing technical support and guidance to the eight Sahel countries, including through helping to strengthen programmes, improving technical capacities and sub-regional collaboration and coordination.

The relationship between the Principality of Monaco and WHO Regional Office for Africa has been ongoing since 2007. Monaco has supported WHO in the fight against malaria in Southern Africa and polio in Niger; the reinforcement of the national health system in Madagascar; and in health emergencies response to the 2014 Ebola outbreak in West Africa in 2014. A grant of 3.65 million Euro in 2010 – 2018 also helped to strengthen malaria surveillance and evidence-based programming in the malaria elimination context and to contribute to sub-regional coordination. 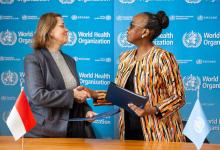