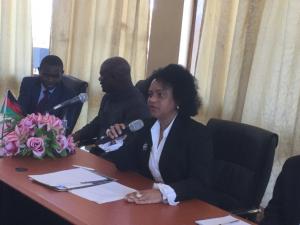 On 13 August 2019 journalists from five media institutions namely; Malawi News Agency, The Times Group, Nations Publication Limited, Zodiak Broadcasting Station and Malawi Broadcasting Corporation in Malawi were informed of the status of the Ebola Disease outbreak in the African Region. This took place at a press conference that took place at the Ministry of Health and Population headquarters in Lilongwe. The Guest of Honour was the Minister of Health, Honorable Mr Jappie Mhango, MP.

The first to speak was the World Health Organization Representative Dr Nonhlanhla Rosemary Dlamini and in her remarks, she informed the journalists that the WHO Director General, Dr Tedros declared the Ebola Virus Disease outbreak in the Democratic Republic of Congo constitutes a Public Health Emergency of International Concern. Dr Dlamini went on to highlight that the World Health Organization does not recommend any restrictions on travel or trade because restrictions hamper the fight against Ebola as they will affect the movement of people and supplies. Furthermore, these measures can be detrimental as they may push the movement of people and goods to informal entry points which are not monitored and thus increase the chance of disease spread.

“Instead, the WHO is calling for a more united approach in which NGOs and UN partners accelerate and scale up all their activities bearing in mind that the primary aim is the prevention of the international spread of disease”, the WHO Representative said. She concluded her remarks by reaffirming the commitment of the World Health Organization and the United Nations as a whole to provide support to Malawi in putting in place measures that prevent any importation of Ebola.

In his speech, the Honorable Minister of Health Honorable Jappie Mhango, MP assured the general public that the Malawi Government is doing everything possible to ensure that the Ebola virus disease is not imported into Malawi. “There is no Ebola case that has been detected in Malawi and in the countries that share borders with Malawi such as Mozambique, Zambia and Tanzania,” the minister emphasized to the attentive journalists. He also echoed the WHO Representative statement made earlier that the World Health Organization does not recommend any travel and trade restrictions and Malawi as a member state of the United Nation was following this guideline.

The Minister also requested a representative of the Malawi Defense Force, Major Kayange to speak to the journalists and in his statement he informed the journalists that the military contingent from Malawi which is on UN peacekeeping mission in the Democratic Republic of Congo is under United Nations and the WHO as a lead UN agency in health provides health guidance to ensure infectious disease precautions are strictly adhered to and thus ensure the health and wellbeing of the Malawi Defense Force.

August 1 2019, marked one year since the Government of the Democratic Republic of the Congo declared the Ebola outbreak. The latest information from the WHO situation report issued on the 6 August 2019 states that the outbreak in the affected northeastern provinces of North Kivu and Ituri is still continuing however, the status is that there are currently no confirmed cases of Ebola outside the DRC and WHO is continuing to monitor the situation and providing guidance accordingly. 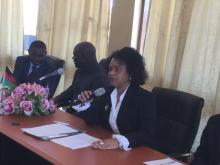