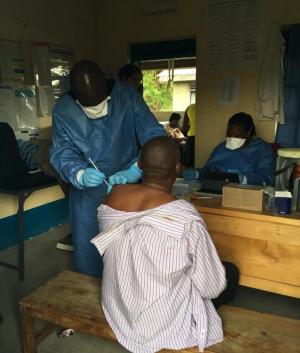 Kampala, 7th November 2018:- The Ministry of Health (MoH) with support from the World Health Organization (WHO) has started vaccinating frontline health workers against the Ebola Virus Disease (EVD). The exercise has begun today in Ntoroko district and will initially be implemented in the five high-risk districts bordering the Democratic Republic of Congo (DRC).

A total of 2100 doses of the ‘rVSV-Ebola’ vaccine will be administered to the health workers to protect them against the type of Ebola virus strain that is currently circulating in some parts of DRC. Indeed, this particular vaccine is currently being administered in DRC and is demonstrating positive protective results and potency against the Ebola virus-Zaire type.

In vaccinating frontline health workers against EVD even before Uganda detects a single case, health authorities are being cautious having learnt bitter lessons from previous outbreaks. A number of health workers including the renowned Dr Mathew Lukwiya contracted the disease and died as they cared for EVD patients. These could have been saved had a vaccine been available then.

Although the ‘rVSV-Ebola’ vaccine is not commercially licensed, it is being used under “expanded access” or what is also known as “compassionate use” in the ongoing Ebola outbreak DRC. This vaccine was also used in the Ebola outbreak in Equateur province in May-July 2018. In 2015, the vaccine was given to more than 16,000 volunteers involved in several studies in Africa, Europe and the United States where it was found to be safe and protective against the Ebola virus.

Several studies have shown that the vaccine is safe and protective against the Ebola virus but more scientific research is needed before it can be licensed. The vaccine is, therefore, being used on a compassionate basis, to protect persons at highest risk of the Ebola outbreak, under a “ring vaccination” strategy, which is similar to the approach used to eradicate smallpox. In this strategy, informed and written consent is needed from people, for them to be vaccinated which in turn may limit mass media coverage of the exercise.

It is highly likely that Uganda may import EVD from DRC given the closeness of the current epicenter, the high population movements due to trade, social-cultural connections and easy accessibility of health services in Uganda.

Uganda’s Minister of Health, Dr Jane Ruth Aceng believes that the administration of the Ebola vaccine to frontline health care workers has been the missing link in the country’s EVD preparation and readiness efforts. She also explains that the vaccine is only available for frontline health workers who are at high risk of contracting EVD as they manage suspected cases.

“Therefore, the vaccine is not available to the general population at this stage. This is targeted vaccination,” Dr Aceng emphasized.

Dr Yonas Tegegn Woldemariam the WHO Representative in Uganda, referred to the vaccination as a huge step in mitigating the risk of Ebola among health care workers.  He assured them about its potency and ability to protect them effectively.

The districts targeted in the current vaccination phase are, Bundibugyo, Kabarole,  Kasese, Ntoroko and Bunyangabu.

Other EVD preparatory activities going on are coordination of activities; health facility and community-based EVD surveillance; collection and testing of blood samples from alert cases; capacity building for infection prevention and control, clinical management, psycho-social care and for safe and dignified burials. Risk communication, community engagement and cross-border surveillance are also going on in many districts.