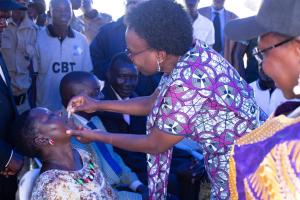 The campaign is aimed at preventing and controlling Cholera in the hot-spot districts including Arua, Buliisa, Busia, Hoima, Kasese, Moyo, Namayingo, Nebbi, Ntoroko, Pakwach and Zombo. It will be conducted in a phased manner as part of the National Cholera Control Plan (2017-2022).

The Cholera vaccines, funded by GAVI- the Vaccine Alliance, were sourced from the Global stockpile.

While launching the campaign, the Minister of Health, Dr Jane Ruth Aceng, mentioned that, annually, Uganda records an average of 1,850 cholera cases and 45 deaths. “The majority of these cases and deaths occur in the high-risk districts”, she said.

Dr Aceng further highlighted the government’s commitment to implementing the Cholera Prevention and Control Strategic Plan (2017 – 2022), a five-year plan which if implemented will result in the reduction of cholera by 50% by 2022 and progress to elimination in subsequent 5 – 8 years.

Cholera is caused by foods, drinks or items contaminated with faeces. Contamination of these items is avoidable by using latrines (toilets) for faecal disposal, personal and domestic hygienic. Protection of water sources from faecal contamination and washing hands after using latrines and before eating food should be universally practiced.

In that regard, Dr Aceng called on district and community leaders to ensure proper disposal of faeces as well as personal and domestic hygiene. She decried the scarcity of toilets and urged leaders to make sure that all homes have toilets.

The World Health Organization (WHO) was represented by Dr Annet Kisakye, the Immunization Focal Person who commended the government for its commitment to control Cholera. She pointed out that Cholera is a global public health issue with persistent incidence and sporadic high mortality epidemics, especially in Sub-Saharan Africa.

“Cholera hot spots are well identified in Uganda”, she said. “The OCV campaign provides an opportunity for Uganda to become one of the leading countries in cholera control, such as Zambia, from which others will be able to learn”, she noted.

WHO and UNICEF as members of the global task force on cholera control, remain strongly committed to supporting the government of Uganda for a successful implementation of the national integrated comprehensive cholera prevention and control plan and ensuring by 2030 a cholera-free Uganda.