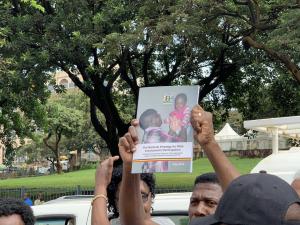 Kampala, 16th December 2019:- Uganda marked the International Men's Day under the theme — 'Engaging Men and Boys for a Healthy and violence-free Generation'.

During the commemoration, the public was implored to support and participate in programs that address the mind-set and gender biases that affect male involvement in health programs, to speak out against practices that undermine male involvement and advocate and uphold human rights in the areas of maternal, adolescent and child health, gender-based violence, HIV and AIDS and Tuberculosis to increase productivity.

The public was further asked to promote positive cultural practices that support male involvement in health programs, emphasize the observance of paternity leave for men to support their wives and promote the participation of boys and men in family and community activities other than only at workplaces.

The Minister of Health Dr Jane Ruth Aceng presided over the event that began with the launch of the Ministry Male Involvement Strategy and Service standards as well as the updated training manual for health workers on the management of Gender-Based Violence and Violence Against Children.

This was followed with a five-kilometre walk to increase awareness about the importance of men's health and their involvement in supporting health programs.

Dr Aceng highlighted the need to invest in programs that cater to the sexual and reproductive health needs and rights of men as well as improving healthcare-seeking behaviour for all disease conditions.

"We also need to invest in prevention programs for drug and substance use as well as alcohol as these negatively affect health and production for wealth," she added.

The Minister further informed participants that globally, gender-based violence is linked to mainly a male perpetrator violating the rights of girls, women and children. “It is therefore important to engage men at various levels to control and stop the vice in our communities,” she noted.

The World Health Organization (WHO) Representative in Uganda, Dr Yonas Tegegn Woldemariam also participated in the commemoration where he emphasized the importance of male-involvement in achieving better health outcomes.

He noted that men’s greater engagement will also open opportunities to improve men’s own sexual and reproductive health, disrupt intergenerational cycles of violence, and promote men’s roles as advocates for better health, including a reduction in violence in families.

"The responsibility for nurturing children including taking them for immunization, seeking health care and feeding the children in the homes has for a long time been largely left to women, it is now time for men to play a role in child upbringing for a stronger nation," he said.

Dr Yonas further said that advocating for male engagement in health contributes and addresses one of the 6 dimensions of measuring WHO’s work as the organization executes its mandate which is: Impactful integration of gender, equity and human rights.

Uganda was recognized for Championing Male Involvement in the Health Sector.

Uganda was recognized as one of the first countries that institutionalised programming for Male Involvement in the Health Sector. The Ministry of Health- Aide Memoir from the Joint Review Mission clearly stated that Male Involvement would be one of the undertakings to be implemented in the coming year.

This is all under the leadership of the Ministry of Health with support from partners including the UN Family and Civil Society organizations such as Maama’s Club Uganda, MEN ENGAGE and many more to implement and advocate for male involvement in health.