WHO Eritrea has provided a training to over 35 health workers as part of strengthening their capacities in the control and elimination of the disease lymphatic filariasis at the conference hall of the National confederation of Eritrean Workers from 30 September up to 4 October 2019.

This five-day training focused on the disease and components of the two main pillars of the Global Programme to eliminate lymphatic filariasis namely the interruption  of the transmission of the infection through mass drug administration (MDA) and the reduction of suffering and improvement of the quality of life through morbidity management and disability prevention (MMDP).

Lymphatic filariasis is a parasitic disease caused by a worm transmitted mainly by the bite of an infected mosquitos. It can also be transmitted by other vectors such as culex, Aedes and Mansonena. The infection can start early in life from two years of age. The disease often occur years after adult worms cause the dilation and dysfunction of lymphatic vessels which predispose individual to lymphedema. The disease can be asymptomatic, Chronic and Acute. Skin lesions allow bacteria to enter the blood stream causing acute attacks which can cause progression of the disease.

Participants were drawn from all regions of Eritrea that included the IDSR focal persons, pharmacists and other health workers.

Dr Didier Bakajika, Medical Officer/ Onchocerciasis/Lymphatic Filariasis from AFRO has been facilitating the training and he said, “Lymphatic filariasis, commonly known as elephantiasis, is a painful and mutilating disease.”

Filarial infection can cause a variety of clinical manifestations, including lymphoedema of the limbs, genital disease and recurrent acute attacks, which are extremely painful and are accompanied by fever. Lymphatic filariasis, considered globally as a neglected tropical disease (NTD). 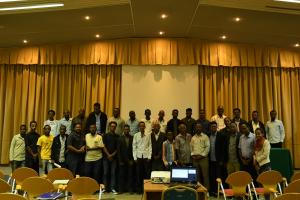 Group photo of the participants of the training
Credits
Click image to enlarge
For Additional Information or to Request Interviews, Please contact:
Mrs Selam Berhane