Togo vaccinates over 90% of health workers against COVID-19 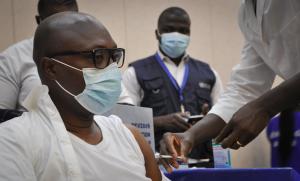 Togo vaccinates over 90% of health workers against COVID-19

Lomé — When Togo launched its COVID-19 vaccination campaign on 10 March, health workers on the frontlines of the pandemic were identified among the priority groups.

“I was afraid to begin with, particularly because we were the first people to be vaccinated,” says Kossi Nouwossan, a physiotherapist at the Zébé Psychiatric Hospital, about 40 km east of the capital Lomé. "But since I am in constant contact with patients, I also felt that it was the responsible thing to do to protect myself and others.”

Nouwossan was one of 33 090 health workers who received their first vaccine dose between 11 and 13 March, equating to almost 95% of the country’s entire health personnel. A total of 30 867 of these caregivers, or around 93%, received their second dose between 18 and 21 May. In doing so, they have helped Togo to reach one of the primary objectives of its vaccination plan just five months after the start of the campaign.

This has seen a significant reduction in the number of health workers being infected with COVID-19, bolstering the country’s response to the pandemic. Between 7 March 2020, when Togo detected its index case, and 24 May this year, nearly a thousand health workers tested positive for the virus. Since the end of May, after the vast majority of them received their vaccine second dose, only 56 health worker infections have been recorded.

Togo’s fast and efficient deployment of vaccines to date has been helped by a substantial provision of doses through the COVAX facility, which aims to achieve equal vaccine access for all. The country received 196 000 doses of AstraZeneca through the facility in March, then a further 100 620 Pfizer doses in May. The African Union also provided 120 000 additional doses of AstraZeneca on 31 March and China gave 200 000 doses of Sinovac on 23 April.

The preparation work carried out upstream of vaccine delivery has also contributed to Togo’s success thus far. “Before we started the vaccination campaign, we had a number of sensitization sessions for health personnel at all levels and across all regions of the country with substantial input from the minister of health and other leading health and science experts,” says Dr Josée Apetsianyi, coordinator of Togo’s technical working group for vaccine deployment.

“This helped to dispel any negative rumours that were circulating about the vaccine and to create a strong bond among health workers so that they would not only get vaccinated themselves but also encourage others to do so.”

The Togolese government has also decentralized the vaccination campaign in order to make it as widely accessible as possible, installing vaccination units in almost all health centres nationwide, as well as in football stadiums, markets and high traffic areas.

The country intends to soon open vaccinations to all people over 50 in the greater Lomé region, who will then be followed by people aged 20–40 years with comorbidities, also in greater Lomé, and finally those over 30 years.

“I got vaccinated to protect myself during my work in the COVID-19 response, but also to protect my family,” says Dr Talboussouma Prisca, head physician at the Amoutivé health centre in Lomé.

“This is a new illness and we are often the first to be in direct contact with people who are infected. For me, it goes without saying that we should be vaccinated, and I had no apprehension in doing so.”

“Togo has implemented a good vaccination strategy as part of its ongoing response to the pandemic, engaging a range of actors from different sectors to help raise awareness and mobilize people,” says Dr Fatoumata Binta Tidiane Diallo, World Health Organization (WHO) Country Representative in Togo.

“We have been working closely with the government every step of the way and are already seeing tangible results. We hope that this continues.”