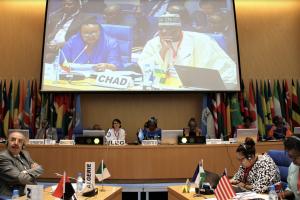 “The plan outlines the urgent and accelerated action that we must take if we are to meet our goal of ending hunger and all forms of malnutrition by 2030,” said WHO Regional Director for Africa, Dr Matshidiso Moeti.

“The WHO Secretariat will be developing and implementing a resource mobilization plan, supporting research collaborations and mounting high-level advocacy for increased investment to reach 90% coverage of the 10 highest-impact nutrition interventions that must be taken to meet the malnutrition challenges in our region,” Dr Moeti said.

The double burden of malnutrition is particularly prevalent in countries undergoing “nutrition transformation” in which undernutrition and overweight or obesity coexist, often because of the increasing consumption of cheap, processed foods that are high in energy, fat and salt content but low in nutrient quality.

This diet, which is common in Africa, fails to address chronic undernutrition and micronutrient deficiencies and contributes to increased obesity and diet-related non-communicable diseases.

The Regional Committee is the governing mechanism involving health ministers from all 47 Member States of the WHO African Region.

The World Health Organization contributes to a better future for people everywhere. Good health lays the foundation for vibrant and productive communities, stronger economies, safer nations and a better world. As the lead health authority within the United Nations system, our work touches people’s lives around the world every day. In Africa, WHO serves 47 Member States and works with development partners to improve the health and well-being of all people living here. The WHO Regional Office for Africa is located in Brazzaville, Republic of Congo. Learn more at www.afro.who.int and follow us on Twitter, Facebook and YouTube.