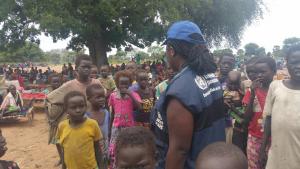 Juba, 04 November 2017: The Ministry of Health and the National Bureau of Statistics, in collaboration with the World Health Organization, Population Services International, UNICEF and partners will conduct the 3rd Malaria Indicator survey (MIS) from 20 November to 10 December 2017. This survey implemented under the Global Fund grant for malaria will target 5 600 households in 280 out of 10 000 enumeration areas across the country.

Malaria is the top cause of morbidity and mortality in South Sudan. In 2017, malaria has accounted for 40% of all consultations in health facilities and 33.9% of all deaths, making it an important public health priority. Malaria epidemics have been reported in many parts of the country from 2014 to 2017. This is fueled by conflict and insecurity, limited access to basic malaria diagnostic, treatment and vector control interventions.

WHO is supporting the Ministry of Health in various ways to implement the 2017 MIS. This includes reviewing the survey protocol and tools, advising on the organization of the survey and training the teams of trainers of the survey enumerators. The Training of trainers was launched on 4 November 2017 in Juba and subsequently 70 enumeration teams in the 10 statistical zones (former 10 states) of the country will be trained to ensure quality data collection. WHO will also support with data analysis and writing of the final report.

The survey will provide data on the coverage of core malaria control interventions, including mosquito net ownership, use of Intermittent Preventive Treatment of malaria (IPTp) during pregnancy, prevalence and type of malaria parasites as well as anemia among children 6 – 59 months and pregnant women. It will also assess knowledge, attitudes and practices regarding malaria in the general population.

‘Malaria control calls for inter-sectoral collaboration at all levels in order to address the social determinants as well as sustained community engagement. This survey will provide the data needed to inform the planning of interventions deployed in South Sudan”, Dr Allan Mpairwe OIC for WHO for South Sudan, underscored. He commended the commitment and leadership of the Ministry of Health in fighting malaria.