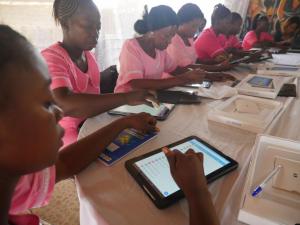 Freetown – 6 June 2019: Sierra Leone has become the first country in the WHO Africa region to fully transform its national disease surveillance system from paper-based to web-based electronic platform. As from today, electronic reporting of disease surveillance data is active in all public health facilities. The process, which was first piloted in just one district in 2016, was successfully rolled out to all the 14 districts and every government health facility countrywide.

“Transitioning disease surveillance data reporting from the traditional old style paper-based format to a computerized format using an advanced technology is ground-breaking for Sierra Leone and we are very proud of being a pivotal part of this great transformation and achievement – from its conception to planning and full implementation,” says Mr Evans Liyosi, World Health Organization (WHO) Representative in Sierra Leone.

“This is a huge success story of partnership. Partners worked together to support the country to achieve this goal. Other countries in the region have a lot to learn from our collaboration and our experience”.

The electronic reporting allows health facility staff to use hand-held tablets developed for the purposes of reporting health data.

A rapid assessment of the country’s disease surveillance system in 2015 revealed several major gaps, including a lack of adequate reporting tools, difficulties with transmitting data, and limited access to laboratory information on priority diseases. The gaps were attributed to the existing burdensome surveillance system. These challenges often resulted in late detection, response to and control of public health events. Once aware of the full scale of the situation, the Ministry of Health and Sanitation decided that immediate action was needed. Supported by WHO and other partners including the US Centers for Disease Control (CDC), e-Health Africa, Focus 1000 and GIZ, the process to migrate reporting from the daunting traditional style paper-based system to a web-based electronic platform (e-IDSR) was started. The goal was to revitalize the national public health surveillance system and to speed up response to public health events through real-time information flow.

Prior to the introduction of this innovation, compliance with reporting surveillance data was much lower. Reporting of weekly surveillance data from the 1 300 public health facilities countrywide was done through mobile phone text messages, phone calls, hand delivery or email. The process was arduous with inaccuracies, with delays and health costs.

The human cost of the out-dated system clearly impinged on the ability of the health sector to effectively monitor and respond to health issues and events in a timely fashion as was seen in the advent of the 2014 Ebola Virus Disease outbreak in the West African sub-region.

“Real-time generation and transmission of data is a crucial function in public health surveillance,” says Dr. Charles Njuguna, Lead for Health Security and Emergencies at WHO Sierra Leone Country Office.  “It ensures early detection and timely reporting as well as making sure that the quality and usefulness of the information from primary healthcare is available for strategic and appropriate decision making at the top level to address public health threats.”

Integrated with the country’s District Health Information System (DHIS2), the electronic system has set the pace for improvement in the timeliness of reporting, reporting rates, data quality and efficiency, and ease of data management at the national level with a real-time feedback system to the lower level.

Aminata Abdulai is a nurse at the Robarrie Child Health Post in Yoni Chiefdom in Tonkolility District, where health workers have recently been trained and have started using the new technology for routine health information processing. She described the system as “revolutionary and motivating” as it eases case investigation and also allows self-performance monitoring and feedback. “This is just what we needed. The system has made our task swift and easy in the midst of serving patients,” she says.

Integrated Disease Surveillance and Response (IDSR) is a strategy developed by WHO in the African region to improve public health surveillance and response by making information readily available for disease control.  It is one of the strategic platforms for implementing the International Health Regulation with regard to Public Health Events of International Concern.