Scaling up genomic sequencing in Africa 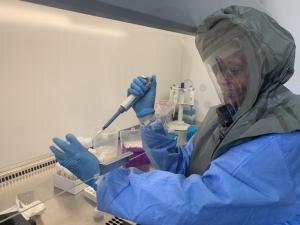 Scaling up genomic sequencing in Africa

Brazzaville – COVID-19 has had a catastrophic impact on lives and livelihoods. But it has also spurred impactful scientific research that gave the world a vaccine in record time and thrust genomic sequencing at the centre of pandemic response.

The world rapidly identified the virus that causes COVID-19 and developed diagnostic tests and other response tools thanks to genomic sequencing, which remains crucial in monitoring the evolution of COVID-19 and identifying variants of concern.

In Africa, World Health Organization (WHO) is working with countries to scale up pathogen surveillance through genome sequencing to detect and respond effectively to COVID-19 variants. In 2020, WHO and the Africa Centre for Disease Control and Preventionestablished a COVID-19 sequencing laboratory network in Africa which has to date produced over 43 000 sequencing data.

Currently, the WHO Regional Office for Africa is collaborating with the South African National Bioinformatics Institute (SANBI) to set up the Regional Centre of Excellence for Genomic Surveillance and Bioinformatics in Cape Town, South Africa. WHO is providing technical support as well as over US$ 4.5 million for operations in the Southern African Development Community region in the first six months. The centre will initially support 14 southern countries, increasing their sequencing capacity by five-fold monthly before expanding to serve more countries.

“Genomic sequencing paves a clear path for us to track the COVID-19 virus, monitor mutations that can lead to new variants and respond effectively and in a timely manner to more infectious variants,” says Dr Nicksy Gumede-Moeletsi, Regional Virologist with the WHO Regional Office for Africa. “The Regional Centre will allow countries to be a step ahead of the virus.”

WHO recommends that countries ship at least 5% of their COVID-19 samples to reference sequencing laboratory or keep producing sequencing data if they have the capacity. Currently, Africa accounts for just 1% of the more than 3,5 million COVID-19 sequences carried out to date worldwide.

Since the South Africa-based Regional Centre’s began preliminary operations in July, genomic sequencing activities have quadrupled in Southern Africa. In the first half of 2021, Southern African countries sequenced 5510 samples compared with over 24 000 currently. This has helped countries detect the presence and understand the impact of variants of concern, notably the Delta variant—the most contagious yet which is estimated to be 30%–60% more transmissible.

African countries are also making efforts to integrate routine genomic sequencing and surveillance into the national response since the beginning of the pandemic. South Africa, for example, detected the more transmissible Beta variant of concern in December 2020, helping the country to adjust public health measures.

“Developing the data management operations has been essential to responding to future disease outbreaks beyond COVID-19. These data operations points to the need for the Regional Centre to strengthen neighbouring countries to ensure local data production and data management,” says Dr Alan Christoffels, Director of the South African National Biodiversity Institute which is part of the efforts to step up genomic surveillance.

The Delta variant, that partly powered Africa’s now-subsiding pandemic third wave, has been detected in 39 African countries, while the Alpha and Beta variants have been reported in 45 and 40countries respectively. The Alpha variant has been detected in most countries in North, West and Central Africa, while Beta is more widespread in Southern Africa.

“Routine genetic surveillance should be a part of health systems in Africa. Building this infrastructure must be a top priority for countries going forward,” says Dr Gumede-Moeletsi.