Responding to the challenge of drug use among women in Nigeria

Abuja, 9 December 2019 - “I used to be a full-time patient at this facility,” says Michelle Eze, a drug abuse survivor, as she signs her name in the register for a check-up with her psychiatrist at Karu General Hospital in Abuja, Nigeria’s Federal Capital Territory(FCT).

“I’m so glad I sought help in time as I was dependent on drugs and it cost me so much. It negatively affected the relationship with my family and people around me. I was disowned and left to face this harsh world all by myself. Drug abuse is a problem we should all join hands and fight it.”

Michelle is now a full-time ambassador against drug abuse among women.
One out of every four people who uses drugs in Nigeria is a woman, according to a 2018 report by the United Nations Office on Drugs and Crime (UNODC).

Over 300,000 Nigerians are high-risk drug users
Approximately 376 000 people – or about 0.4% of the Nigerian population aged 15-64 – are reckoned to be high-risk drug users, according to the UNODC report. Nearly 90% of these users regularly take opioids – particularly pharmaceutical opioids such as tramadol codeine, or morphine – while the others take cocaine or amphetamines.

Over 20% of the high-risk drug users inject drugs, with women first injecting on average at 20 years old and men first injecting on average at around 21 years old.  HIV prevalence among women who inject drugs is almost seven times higher than among men who inject, according to the 2010 National Agency for the Control of AIDS (NACA) Integrated Biological and Behavioural Surveillance survey.

“At Karu hospital, we receive roughly 15 patients every day and usually at least half of them report to be using one drug or another,” says Pius Wabass, a psychiatric nurse on the Karu General Hospital’s psychiatry ward.

“These patients are often so young – under 40 – and, of late, more women are checking into our facility. The misuse of drugs
has serious health repercussions. Medically, opioids are primarily used for pain relief, including anaesthesia, while amphetamines are powerful stimulators of the central nervous system used to treat some medical conditions.”

Efforts to respond to drug use in Nigeria
As countries including Nigeria make efforts to respond to drug use among the population, health experts note that there are some factors that affect women more than men.  A lot of factors have been identified as putting women at increased risk, some are psychological, cultural, social and economic aspects of their lives. Another issue is the general perception that drug use is a male issue and women users are often reluctant to seek help. The Federal Ministry of Health (FMOH) is now addressing this.

“The FMoH has taken up this challenge and currently working with all stakeholders to respond to drug use among young people, especially women,” explains Dr Jimoh Salaudeen  from the Food and Drug Division, FMOH. As part of the response, a women-specific drug treatment programme has been established at the federal neuropsychiatric hospital in Kware in Sokoto State and the ministry hopes to replicate such centres across the country.”

Dr Salaudeen continues: “There is a strong linkage between opioid use disorders and health conditions such as preterm births, stillbirths, poor foetal growth, maternal death and neonatal abstinence syndrome. This is why the Ministry of Health has prioritized sexual reproductive health, particularly for women, within the context of drug treatment and harm reduction.”
Working assiduously to reduce drug demand and harm in Nigeria

The FMOH, with the support of WHO, established the National Technical Working Group (NTWG) on drug demand and harm reduction in Nigeria in May 2019.

“The NTWG is working under the leadership of the Minister of Health and is actively engaged in implementing a comprehensive public health response to the challenge of drug use in the country,” says Dr Rex Mpazanje, WHO Cluster Coordinator for Communicable and Non Communicable Diseases.

“This effort also includes bringing together different stakeholders at the national and state level for a concerted response.  This includes advocacy, capacity building and resource mobilization to ensure promotion of evidence-based prevention activities and the availability of drug treatment and harm reduction programmes at community level.”

Target 3.5 of the United Nations 2030 Sustainable Development Goals (SDGs) is to strengthen the prevention and treatment of substance abuse, including narcotic drug abuse and harmful use of alcohol. WHO Nigeria will continue to support to the Government of Nigeria in achieving this goal. 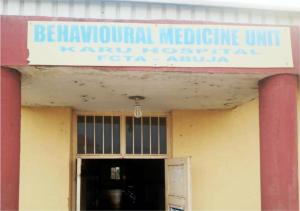