Psychological support for life after Ebola

It is a bittersweet day for Kennedy, 8 years old, who is about to be released from the Ebola Treatment Centre (ETC) in Butembo, in the Democratic Republic of the Congo.

On the one hand, he is cured.

On the other, he has lost two family members to the disease - and he does not know it yet.

Ebola has a fatality rate of about 50%, so explaining the loss of family members and helping patients through the grieving process is a daily task for psychologists who work alongside doctors, nurses and caregivers.

There are five psychologists and 11 psychosocial assistants, trained by the Danish Refugee Council and financed by UNICEF, working at the Butembo ETC.

Kennedy’s psychosocial assistant, Shabani Dezy, sits down with him for his session. First, he asks Kennedy some questions. Is he aware his sister and grandfather were also sick? When was the last time he saw them?

Then he explains how they too were admitted to the ETC as suspect cases and transferred to the confirmed cases ward. He talks about the time he and other health workers spent with them and the care they were given.

Finally, he asks about which religious background Kennedy belongs to and he explains they have gone to heaven for their second life.

"Kennedy, if today we call you a hero, it’s because God wanted you to stay alive because there is something you will accomplish in your life.”

Outside the treatment centre, Kennedy’s family is waiting to receive him. His mother is still mourning the loss of her father and daughter. She too has been working with psychologist Dezy to move forward. He reminds her anytime she or Kennedy need help to come see him.

Dezy explains the people in the area are already traumatised by the ongoing conflict, and Ebola exacerbates the situation.

“Ebola is a new threat in this community. It has affected everyone's mental health. It’s a disease that kills so many, and everyone is afraid of death. It also affects the economy because decontamination efforts require mattresses and other personal effects to be destroyed."

Then there is the stigmatisation. Some households have had multiple deaths in the family. The surviving family members tend to be stigmatised by the community who stop doing business with them or coming to visit.

“They say, 'there’s the family that brought us Ebola. We don’t want anything to do with them.' My colleagues and I have worked hard to understand the environment surrounding families and to work to reintegrate them."

Ebola is a traumatic illness both in terms of symptom severity and mortality rates. Those affected are likely to experience psychological effects due to the traumatic course of the infection, fear of death and the experience of witnessing others dying. It can have a significant impact on the wellbeing of those affected, their family, community members and the health workers treating people with Ebola.

Survivors can experience psychosocial consequences due to feelings of shame or guilt (e.g. from transmitting infection to others) and stigmatization or blame from their communities. Some have been threatened, attacked, evicted, left behind by, or excluded from, their families and communities because they were seen as tainted and dangerous. Fear and stigma of Ebola are contributed to by cultural beliefs, widespread fears due to high infection risk, lack of information and misinformation.

WHO and partners provide financial resources, guidelines and training materials for responders to provide humane, supportive and practical help to communities affected by the Ebola outbreak in North Kivu, DRC. 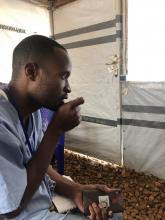 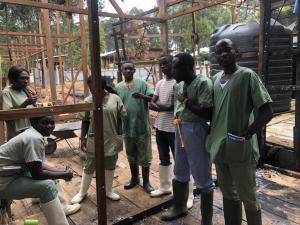 Psychologist team at the Butembo Ebola Treatment Centre meet in their office which was damaged in an arson attack earlier this year.
Credits
Click image to enlarge