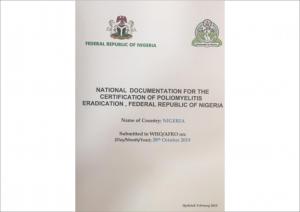 Abuja, 07 December 2019 – The Africa Regional Certification Commission (ARCC) for poliomyelitis eradication kicks off, a two-week visit to Nigeria on 09 December 2019, to conduct critical analysis and verify the accuracy of the certification documents prepared by the Nigerian Government.

The independent commission has already accepted the documentation of 43 African countries as part of the process to certify the African Region free from all types of wild poliovirus, with only Cameroon, Central African Republic, Nigeria, and South Sudan remaining.

No wild poliovirus has been detected anywhere in Africa since 2016. This stands in stark contrast to 1996, a year when wild poliovirus paralysed more than 75,000 children across every country on the continent.

The last wild poliovirus-caused paralysis was on detected on 21 August 2016 in Nigeria, while the last environment sample with traces of the wild poliovirus was detected in Kaduna State from a sewage sample collected on 5 May 2014.

“The ARCC has invited Nigeria to present its final documentation to receive a wild polio-free status in June 2020. In this light, the ARCC has planned two field verification visits. The first is to the Southern States from 9 to 20 December 2019 and the second is to the Northern States, from 2 to 13 March 2020,” said Dr Faisal Shuaib, Executive Director of National Primary Health Care Development Agency (NPHCDA).

The primary requirements for the region’s certification include that no wild poliovirus transmissions are detected for a minimum of three consecutive years in all the region’s countries, coupled with having a high quality certification standard acute flaccid paralysis surveillance, a clinical symptom of poliomyelitis, in all countries for those three years. Other considerations include that countries maintain high immunization coverage for oral polio vaccine, as well as maintaining a robust national polio outbreak preparedness and response plan and a functional National Polio Certification Committee.

During the verification visit to Nigeria, nine ARCC members will assess the strides made so far in the fight against polio and deliberate on key resolutions in view of Nigeria’s polio status.

“Having achieved the milestones of primary requirements, the ARCC will first review the complete documentation report of the interruption of wild poliovirus type 1 and then proceed to conduct field verification visits to select states in the south of Nigeria,” said Dr Fiona Braka, the WHO Nigeria Team Lead, Expanded Programme on Immunization (EPI).

“If the ARCC is satisfied with the national documentation and field verification after both visits in December 2019 and March 2020, the WHO African Region could be certified to have eradicated polio by mid-2020,” added Dr Braka.

Polio is a highly infectious disease caused by a virus that mainly affects children under five years of age. It invades the nervous system, and can cause total paralysis in a matter of hours.  Among those paralyzed, 5% to 10% die when their breathing muscles become immobilized.

After more than two years without the detection of wild polio in Nigeria, the Government reported four laboratory confirmed wild poliovirus type one (WPV1) cases with onset between July and August 2016.

All four cases were detected from Borno State, in children between 2 and 5 years of age.

The detected viruses are closely linked to WPV1 last detected in Borno in 2011. This is an indication that this virus strain has been circulating without detection since that time.

The World Health Organization contributes to a better future for people everywhere. Good health lays the foundation for vibrant and productive communities, stronger economies, safer nations and a better world. As the lead health authority within the United Nations system, our work touches people’s lives around the world every day. In Africa, WHO serves 47 Member States and works with development partners to improve the health and well-being of all people living here.