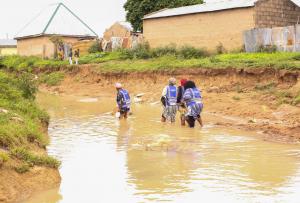 Flash flooding has created a humanitarian emergency in areas of north-eastern Nigeria already complicated by insurgency, internally displaced persons (IDPs) and a fragile health system. Now rising is the threat of water-related diseases, such as cholera and acute watery diarrhoea, which are easily spread through contaminated floodwater.

Every year during the rainy season in Nigeria, flooding inundates many states, from north to south, creating situations ranging from mild to severe, some of it capable of producing serious health hazards. With rainy season starting three months’ sooner in the southern region (in March), the threat potentially lasts up to more than 200 days.

In 2018, more than 1.9 million persons were affected by floods across 12 states in Nigeria. More than half a million of them were displaced from their homes.

Flash flooding struck this past month in the northern Adamawa, Borno and Yobe states, affecting IDP camps and host communities. But to complicate matters, Adamawa State was coping with an ongoing cholera outbreak in four Local Government Areas before the flooding began, with 674 cases, including four deaths, reported since 23 August. Now, the torrential rains and flash flooding have hindered some of the response efforts.

In Borno State, the torrential rains and flash floods affected an estimated 6 742 households in IDP camps and wiped out some of the water, sanitation and hygiene facilities, further increasing the likelihood of a cholera outbreak.

Emergency response in the northern states

The State Ministry of Health in the three northern states, along with partners, including the World Health Organization, have moved into emergency response mode to minimize the medical needs of people affected, by setting up health camps and mobile clinics – and capitalizing on the infrastructure that has worked well towards eradicating polio – to increase outbreak prevention and the protection for communities when they do occur. The staff used for polio activities are now conducting patient consultations, immunization activities, surveillance for vaccine-preventable disease and social mobilization activities against open defecation.

In addition to the emergency response and as part of the Government’s ramping up its preparedness for all health emergencies, the National Emergency Management Agency (NEMA) this year is rolling out mitigation measures to respond to any possible disaster as a result of flooding.

“We may not be able to determine the magnitude of the rain that may fall, but we can decide to help reduce the negative impact on our people,” says Mustapha Maihaja, NEMA Director-General. His agency worked with the Hydrological Services Agency, the Nigeria Meteorological Agency and dam managers to develop an updated flood preparedness and response plan.

The WHO Health Emergency Programme worked with the Federal Ministry of Health and State Ministries of Health to train 321 community surveillance volunteers to strengthen the country’s early warning system for prompt detection of flood-related illnesses, like cholera. They strengthen the early warning system by conducting community-based surveillance, interacting with community informants and conducting active case search.

Additionally, in the North-East, WHO has trained 12 doctors and four nurses on infection prevention and control, including how to investigate and respond to cholera outbreaks. They now serve as clinical focal points for the flood-related disease emergencies. WHO has also stocked regional facilities with basic health commodities, such as cholera prevention kits for use in a health emergency situation.

In the south-eastern flood-prone and flood-affected areas, a community-wide flood-alert mechanism has been set up in the form of a network of health emergency and surveillance volunteers who use the dry days to talk with communities about flood preparedness. Information, education and communication materials, along with public service announcements for television, radio and town hall meetings, have been used to inform the public of prevention and mitigation measures to reduce their risks of flood-related injuries and illnesses.

WHO has supported the sensitization and community engagement activities as well as helping to set up emergency preparedness and response committee meetings with the public health departments,” explains Dr William Komakech, a WHO Zonal Coordinator for south-eastern Nigeria.

Earlier in the year, WHO worked with the government of Anambra State to establish and train multidisciplinary rapid response teams in eight districts that are most-prone to floods to enable the health authorities to respond promptly to flood-related health emergencies, especially disease outbreaks. Mobile health camps, ready to spring up at a moment’s notice, have been prepared in the at-risk south-eastern states.