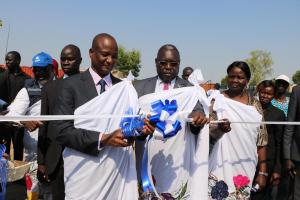 The opening of the Dr John Garang Infectious Diseases Unit comes at a time when the Government of Republic of South Sudan, World Health Organization (WHO), other UN agencies, donors and technical partners intensify preparedness in response to an Ebola outbreak in the Democratic Republic of the Congo. The 24-bed Infectious Diseases Unit is established as part of the national emergency preparedness and response efforts. This unit, which is housed within the Dr John Garang Diagnostic Center, is established to safely isolate and care for patients with highly infectious diseases including those with suspected Ebola Virus Disease (EVD) while they await laboratory confirmation. It was constructed by WHO in collaboration with the Ministry of Health. The Unit will also serve as a training and simulation facility to build national capacity in management of infectious diseases.

During the inauguration, His Excellency Gen. Taban Deng Gai, the First Vice President of South Sudan congratulated the Ministry of Health, WHO, USAID and all partners for the continued support. H.E. the First Vice President underscored the opening of the Infectious Diseases Unit as a milestone in the fight against infectious diseases which are frequent. He acknowledged WHO and all partners unwavering resolve to support strengthening of the health sector. In this regard, H.E. stated, “With your technical and financial backing, the Republic of South Sudan is in the process of establishing a health system capable of delivering quality healthcare services”.

The Honourable Minister for Cabinet Affairs, Dr Elia Martin Lomuro speaking on behalf of Dr Riek Gai Kok, The Hon Minister for Health, underscored the good partnership and support from all partners. The Hon Minister also acknowledged the high-level government support to the health sector. He also appreciated the donor community, partners and other implementing agencies for their concerted efforts towards building capacity and the much-needed health infrastructure. Dr Lomuro appealed to donors and the government to mobilise more resources to support health infrastructure including the Infectious Disease Unit.

In his remarks, Dr Olushayo Olu, WHO Country Representative for South Sudan extended the WHO Regional Director for Africa Dr Matshidiso Moeti’s congratulations to the government and people of South Sudan and the health partners on the inauguration of the Dr John Garang Infections Disease Unit. He noted “This unit is very cost effective and contributes not only to the efforts of emergency preparedness and response to highly infectious diseases in the country but also to longer term communicable disease prevention and control”. He reiterated the commitment of WHO to contribute meaningfully to development of the health system of the Republic of South Sudan.

Chairperson of Senate Committee on Health and HIV/AIDs, Ms Victoria Graham, Health Office Director of USAID representing the donors, and Paul Mark, Country Director Samaritan Purse representing the Implementing partners. All speakers reiterated the commitment of their respective organizations to work with the Ministry of Health in strengthening national EVD preparedness. The EVD Incident Manager Dr Richard Laku highlighted the situation of Ebola Disease Outbreak in DRC, the risk posed to South Sudan and the role of the Public Health Emergency Operations Centre in combating public health emergencies including in EVD preparedness. He further called for support to establish similar units in Yambio and Yei which are considered to be very high risk for Ebola transmission into the country.