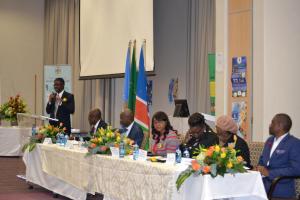 The Prime Minister said that over 50% of deaths in Namibia are due to non-communicable diseases.  The most common NCDs in Namibia are cardiovascular diseases, diabetes mellitus, cancers and chronic obstructive airway diseases, the PM said.  Namibia also has a very high prevalence of high blood pressure which is a key risk factor for stroke and heart attacks.  “Almost one in five Namibian adults is obese due to consumption of unhealthy diets and sedentary lifestyles. Further, the country’s total per capita consumption of alcohol stands at 10.8 liters, again making it one of the highest in the SADC region

Speaking at the same occasion was the Deputy Minister of Health and Social Services, Hon. Julieta Kavetuna, who emphasized the need to prioritize investment in the prevention and control of NCD to reduce the cost associated with treatment.

Dr Charles Sagoe-Moses, WHO Representative, in his remarks commended the country for addressing the risk factors of NCDs and for putting measures in place to improve access to all who require treatment.  ‘The country has a unit dedicated to the prevention and control of NCDs, there are measures through legislation and policies to control tobacco and alcohol use.  Namibia is one of the few countries in Africa with a cancer registry.’ He further said that there is need to strengthen efforts in the development of treatment guidelines and protocol as well as to develop health promotion programmes to address unhealthy diets and physical inactivity.

The age standardized NCD death rate for the WHO Africa Region was over 650 per 100,000 populations compared to the global average of 539 per 100,000 population. This was revealed by Dr Barango Prebo from WHO inter-country support team who came to support the launch.  He further stated that NCD risk behaviors such as physical inactivity, unhealthy diets, tobacco use and harmful use of alcohol were on the rise among young people.  For example 18% of young people in Africa use a tobacco product and half of adolescents are exposed to second hand smoking. 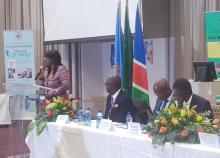 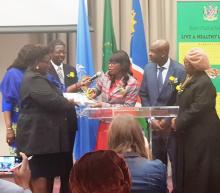