Moving towards malaria elimination in Namibia 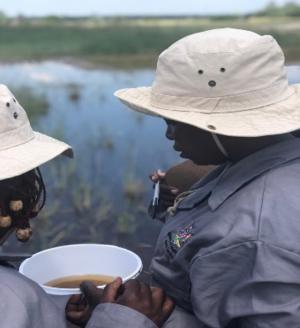 Moving towards malaria elimination in Namibia

The Ministry of Health and Social Services (MoHSS) in partnership with the World Health Organization (WHO) is currently implementing the WHO/AFRO II larviciding demonstration project in six districts in Omusati, Oshikoto, Ohangwena, Kavango East and West regions where malaria is transmitted.  The project aims to strengthen national capacity for implementing diversified mosquito control measures to contribute towards malaria elimination. The objective of the project in Namibia is to assess the effectiveness of community based mosquito larviciding (treatment of water bodies with a biological agent to kill the baby mosquitoes) in addition to indoor house spraying and insecticide treated nets as an additional tool for mosquito and malaria control.   It also aims to  strengthen national capabilities for implementation and scaling up of evidence-based, innovative, diversified and environmentally sound disease vector control interventions with particular focus on winter larviciding as an additional vector control tool to achieve malaria elimination.

So far one thousand eight hundred and forty-three (1843) blood samples have been collected to determine the presence of malaria amongst the people in the households in the 12 study sites. One thousand four hundred and sixty-six (1466) houses were counted and household questionnaires administered to the household heads to obtain socio-economic and malaria status information. The survey samples and the data collected are currently being processed.

The project has now been implemented for a period of three months and a refresher training was conducted for the district health teams in Oshakati and Rundu on 11-16 March 2019. The objectives of the training were to review project implementation, share experiences and lessons learnt from the field, re-orientate field teams on the standard operating procedure of mosquito larval breeding site mapping and mosquito larval collection and sampling as well as to introduce and train the field teams and supervisors on the electronic mosquito larval breeding site mapping forms.

In 2016 WHO published an analysis of 21 countries with a potential to eliminate malaria by 2020.  These countries were selected based on 3 criteria: a) trends in malaria case incidence between 2000 and 2014; b) declared malaria objectives of affected countries; and c) informed opinions of WHO experts in the field.  Namibia being amongst the selected 21 countries is participating in this innovative regional project in an attempt to have zero malaria cases by 2020.  The country’s progress towards reducing the transmission of malaria is impressive.  Malaria incidence reduced significantly by 97% between 2000 and 2012 with a slight increase in 2013, 2014, 2016 and 2017. The surge in malaria cases are seasonal and thus the need to increase control measures to ensure complete elimination. 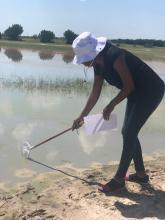 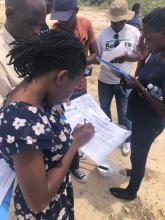 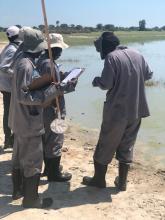