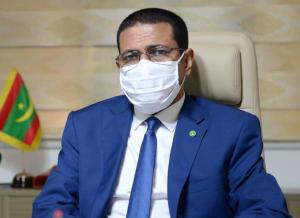 Nouakchott – With COVID-19 cases declining after a second wave of the pandemic in Mauritania saw an acute, fast rise, Minister of Health Minister Hon. Dr Mohamed Nedhirou Hamed shares what it took to limit the spread of the virus and the lessons learned that can be applied to an eventual COVID-19 vaccination.

What strategies have helped Mauritania bring down COVID-19 cases?

Mauritania has experienced two waves of the COVID-19 pandemic: between May and July and recently a second one that began in mid-November 2020. This second wave was more acute as cases peaked within a month. However, infections have since dropped considerably owing to the measures taken by the whole government through an inter-ministerial committee. The measures included banning of all public gatherings, a curfew that was progressively extended, observing physical distancing and wearing of masks in public spaces, particularly in schools and mosques.

In addition, reinforced testing played a major role in reducing and keeping the number of cases low. The testing rate has topped 5% of the population since the beginning of the pandemic.

Finally, one other reason that has helped keep infections down is the success of awareness campaigns conducted by the government, civil society and the media. It is a combination of all these measures and actions that have, thanks be to God, led to the decrease in cases in our country and we hope that this will continue God willing.

What measures need to be bolstered to keep cases low?

For cases remain low, it is crucial to continue working together to ensure that preventive measures are adhered to in all public places. The inter-ministerial committee chaired by the Prime Minister has stressed on this at a recent meeting and sent a strong message to citizens that the pandemic is still with us as long as cases are detected in the country.

One of the key decisions taken at this meeting was to strengthen testing, which will be widened. So far it has focused on suspected cases and travellers. Testing will now be expanded and opened to help us curb the spread of the pandemic and keep the number of cases low.

What lessons have been learned in COVID-19 response and how can they be applied to ensure a successful vaccination campaign?

The most important lesson is having a strong and resilient health system which is flexible to cope with health challenges, especially emergencies. During the first wave, we learned a lot about our health system as we gradually adapted it to the pandemic response. It is noteworthy that our health system was not overwhelmed by mild or severe cases.

Health issues in general and emergencies in particular require a multisectoral response, which has been one of our country's strengths. In Mauritania, even before any cases were detected, the government set up an inter-ministerial committee chaired by the Prime Minister where all the ministries committed to work together to fight this pandemic.

This multisectoral nature of the response was essential, particularly in the setting up of epidemiological surveillance after cases were detected in China. It has also been critical to the response, which requires the involvement of all sectors.

The third lesson learned was the central role played by assets such as human resources in the response as well as in prevention and care. The government has strengthened the response by recruiting additional health personnel and training at all levels.

Communicators also played a central role in the response whether they were state or non-state. Notably communicators at the community level such as elected officials and local authorities. Community leaders are the ones most listened to by the population.

Logistics was also critical. During this crisis we have learned that if logistics is not properly understood it makes the response less effective.

These lessons can indeed help us in ensuring an effective vaccination campaign, which will be led by the same multisectoral COVID-19 committee at the national level. The central role of communication will remain the same since the campaign will rely on this critical element to persuade and reassure people. Human resources are also crucial since health personnel are first and foremost the actors in the vaccination process, whether civilian, military or private.

I would like to acknowledge the support of technical and financial partners, especially the United Nations system, and in particular WHO's support in the critical areas mentioned above, such as human resources and logistics.