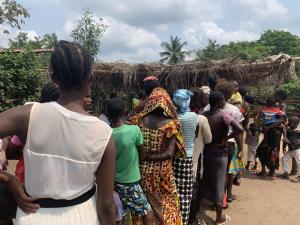 Kinshasa, 5 December 2019 – Around 2.2 million children are to be vaccinated against measles in North Kivu, the Democratic Republic of the Congo (DRC), where efforts are underway to curb the world’s second-worst Ebola outbreak amid persistent insecurity.

The DRC is also currently experiencing the world’s largest and most severe measles epidemic, affecting all its 26 provinces. Since the start of 2019, more than 250 000 suspected cases and over 5000 deaths mostly among children under 5 years, have been recorded.

This mass follow-up campaign will ultimately reach 18.9 million children across the country by the end of the year, particularly targeting those who may have been missed by routine immunization.

“While the Ebola outbreak in the DRC has won the world’s attention and progress is being made in saving lives, we must not forget the other urgent health needs the country faces,” said Dr Matshidiso Moeti, WHO Regional Director for Africa. “This new vaccination campaign aims to protect children in North Kivu, as well as other parts of the country from a disease that is easily preventable with a vaccine.”

Low immunization rates and high levels of malnutrition have contributed to the measles epidemic and associated high rates of mortality.

In North Kivu, the measles vaccination is being carried out under a challenging context, with high insecurity particularly around Beni town and Masisi territory.

“In the context of North Kivu, where the population is highly mobile, it is imperative that we reach out to travellers and ensure that their children are also covered. Every child should receive his or her vaccine so that they are well protected and can grow up healthy,” said Dr Deo Nshimirimana, WHO acting Representative in the DRC.

The five-day campaign is being implemented by the Ministry of Health with the support of WHO and partners and is fully funded by Gavi, the Vaccine Alliance. WHO staff are assisting the health ministry’s national and field coordination efforts, case management, epidemiological surveillance and deployment of a post campaign survey.

“Sadly, measles has claimed more Congolese lives this year than Ebola. We must do better at protecting the most vulnerable, who are often also the hardest to reach. This campaign is an important step in that direction,” said Thabani Maphosa, Managing Director of Country Programmes for Gavi. “For maximum impact, campaigns must be combined with the strengthening of routine immunization and health systems.”

Strengthening routine immunization, measles case-based surveillance and case management will contribute to ending the current outbreak and eliminating measles as a public health threat in the DRC.

Lack of funding has hampered efforts for reactive campaigns. To date, US$ 27.5 million have been mobilized; however, another estimated US$ 4.8 million are needed to complete the vaccination campaign and response and to strengthen other elements of response such as disease surveillance, case management and communication.