The efforts made by the Republic of Mauritius and its commitment and leadership in the African Region were recognized by the World Health Organization during the World No-Tobacco Day 2019.   Dr Hon Anwar Husnoo, Minister of Health and Quality of Life received the ‘Certificate of Appreciation’ from Dr Laurent Musango, WHO Representative in Mauritius on behalf of Dr Tedros, Director General and Dr Moeti, Regional Director of the World Health Organization during the celebration of the event on 30 May 2019 at S. Virahsawmy State Secondary School in Rivière du Rempart.

WHO Representative in Mauritius, Dr L. Musango congratulated the Ministry of Health and Quality of Life for significant achievements in tobacco control.  The latter highlighted that the Republic of Mauritius showed great commitment in fighting the global epidemic by acceding to the WHO Protocol to eliminate illicit trade in tobacco products in June last year. Mauritius is the 39th country which contributed to the coming into force of the Protocol in the world.  The yearly increase in taxation of tobacco products in the Annual Budget also shows the determination of the country in reducing the prevalence of tobacco.  Dr Musango emphasized the bold tobacco control policies and measures taken by the country, namely its great political commitment to implement Tobacco Plain Packaging Regulations and the progress made in finalizing the draft tobacco plain packaging regulations; the development of the new set of pictorial health warnings for tobacco products which are now ready for implementation; the free tobacco cessation services offered to smokers to support them to quit smoking; the establishment of a Tobacco Control Unit with dedicated human resources for tobacco control at the level of the Ministry; the implementation of its second National Action Plan on Tobacco Control after successful implementation of the first National Action Plan in 2008-2012, new strengthened tobacco regulations which ban smoking in public places and prohibit advertising, promotion and sponsorship, among others.  Since the ratification of the WHO Framework Convention on Tobacco Control in 2004, the country is serving as tobacco control model for other African countries. 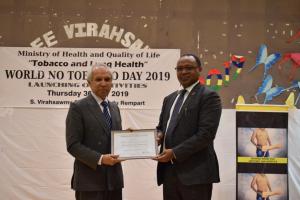 Dr Hon Anwar Husnoo, Minister of Health and Quality of Life receiving the ‘Certificate of Appreciation’ from Dr Laurent Musango, WHO Representative in Mauritius on behalf of Dr Tedros, Director General and Dr Moeti, Regional Director of the World Health Organization during the celebration of the World No-Tobacco Day 2019
Credits
Click image to enlarge
For Additional Information or to Request Interviews, Please contact:
PITCHAMOOTOO Vinoda