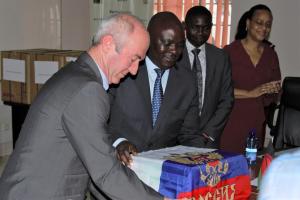 Lilongwe - On 3 October Mr Illiya Madiev, Charge d’Affaires of the Embassy of the Russian Federation to Malawi handed over medicines to the Malawi government at a ceremony that took place at the Community Health Sciences Unit in Lilongwe. The Guest of Honor was the Minister of Health and Population, Honorable Jappie Mhango, MP and the distinguished guests were the WHO Representative, Dr Nonhlanhla Rosemary Dlamini and the Secretary for Health, Dr Dan Namarika.

Honorable Jappie Mhango, MP, informed the gathering that the State President of the Republic of Malawi, declared the state of disaster early in the year when Cyclone Idai caused severe weather events in the form of heavy continuous rain and strong winds. People died, some were injured and many homes were destroyed. “This donation by the Russian Federation has therefore been made in response to the call by the Head of State and will go a long way to fill the health service gap created by effects of the severe weather events,” the Minister said. He went on to explain that the Ministry of Health and Population in collaboration with Department of Disaster Management Affairs and stakeholders like WHO were currently working together in managing the post recovery effects of the floods.

In her speech during the handover ceremony, Dr Dlamini informed the audience that the medicines that the Russian Federation was handing over were from WHO global stockpile. “I would like to assure you that the medicine that the Russian Federation is handing over today still have a long shelf life and they are safe and ready for use since they are from the WHO global stockpile,”

Tropical Cyclone Idai was one of the worst tropical cyclones on record to affect Africa and the Southern Hemisphere. The long-lived storm caused catastrophic damage in Mozambique, Zimbabwe, and Malawi, leaving more than 1,300 people dead and many more missing. Idai is the deadliest tropical cyclone recorded in the South-West Indian Ocean basin.